A Very Curious Sentence in Giuseppe di Lampedusa’s The Leopard 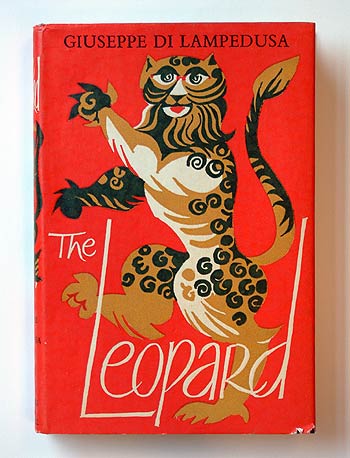 So I recently finished reading The Leopard (or Il Gattpardo as it’s known in Italian), the great but sadly one-and-only novel written by Giuseppe di Lampedusa. The book was originally published in 1958, exactly one year after the author’s death, and it is well-known today primarily for serving as the basis for Luchino Visconti’s opulent, Burt Lancaster-starring film version from 1963. To anyone with an interest in the movie — and you should be interested in it (although if you’ve not yet seen it you may want to bone up on reading about Garibaldi, the Risorgimento and 19th century Italian history in general over at Wikipedia first) — I would also recommend checking out the source novel: it will help you to understand the soul of the Sicilian people. Catholic hypocrisy, class differences, aging machismo, an elegy for the dying aristocracy, etc. All of that and more comes to life in Lampedusa’s beautiful and vivid prose.

I must admit, however, that one very curious sentence in the book caught me completely off-guard — a startling cinematic reference that the author casually drops into the middle of a scene taking place in 1860 when most of the novel’s action is set. Lampedusa describes the elation of Angelica (the character played by Claudia Cardinale in the movie) upon being asked to marry Tancredi (the character played by Alain Delon) by his uncle, the Prince of Salina (Lancaster’s character):

After this Angelica blushed, took half a step back: ‘I’m so happy . . .,’ then came close again, stood on tiptoe, and murmured into his ear, ‘Uncle mine!’; a highly successful line, comparable in its perfect timing almost to Eisenstein’s baby carriage, and which, explicit and secret as it was, set the Prince’s simple heart aflutter and yoked him to the lovely girl forever.

While one might expect this kind of surprising anachronistic metaphor from, say, Thomas Pynchon (who deliberately and hilariously peppers his “period” novels with this sort of thing), it is the only such 20th century reference that I’m aware of in Lampedusa’s entire novel — at least until the brief epilogue, which flashes-forward to 1910 (and that’s still 15 years before Eisenstein’s movie was made). As incongruous as it may seem, however, I think Lampedusa does have a point: Sergei Eisenstein’s baby carriage shots are perfectly placed within the Odessa steps massacre montage towards the end of Battleship Potemkin. One might even say that they serve as the climax of the film’s climax. The great Russian director, who edited his movies with almost mathematical precision, certainly knew a thing or two about timing — as did Lampedusa and, for that matter, Visconti.

Both Battleship Potemkin and The Leopard are available in high-quality restored editions on Blu-ray and DVD, the former via Kino and the latter via Criterion (the Blu-ray of which is the greatest shit evah). My copy of The Leopard, the novel, was published by Pantheon Books in 2007 and translated by one Archibald Colquhoun.

Filmmaker, author and Film Studies instructor. END_OF_DOCUMENT_TOKEN_TO_BE_REPLACED
This entry was posted on Friday, May 17th, 2013 at 6:59 am and tagged with Battleship Potemkin, Giuseppe di Lampedusa, Il Gattopardo, Luchino Visconti, Sergei Eisenstein, The Leopard and posted in Uncategorized. You can follow any responses to this entry through the RSS 2.0 feed.
« Spotlight on South Korean Cinema: Park Chan-wook and J.S.A.
The Last Ten Movies I Saw »