Newly released on Blu-ray from Lionsgate UK is a newly restored version of Hammer Studios’ original 1958 production of Terence Fisher’s Dracula (also known to ugly Americans as Horror of Dracula). While I am by no means a Hammer expert, I do love a good horror movie as well as a good restoration job; this release happily combines both of those things in a high-quality package that probably deserves to be called the definitive home video presentation of Fisher’s masterpiece. One should not confuse this restoration, however, with the 2007 BFI restoration of the very same film. Hammer’s new version happily restores approximately 20 seconds of sensuality and gore, recently unearthed in Japan, that had been ordered cut by the British Board of Film Censors before its original release 55 years ago (more on that later). Longtime fans should be eager to scoop up this set — not only because of the newly restored footage but also because this release presents Dracula on home video for the very first time in its original theatrical aspect ratio and in the closest approximation of its original color timing. Horror aficionados who haven’t yet seen it should also be curious to find out why it is perhaps the most influential cinematic adaptation of Bram Stoker’s often-filmed novel (barring perhaps only Nosferatu, F.W. Murnau’s unofficial version from 1922). It should be noted that this release of Dracula is a Region-B locked disc, meaning anyone living outside of a designated “Region-B” country needs to have a multi-region Blu-ray player to enjoy it. 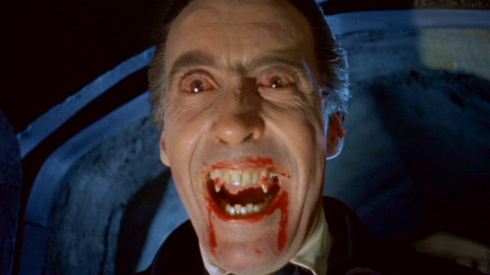 The first thing one notices about Hammer’s approach to Dracula is how much director Fisher and Hammer contract-writer Jimmy Sangster have streamlined Stoker’s narrative. When Jonathan Harker (John Van Eyssen) travels to Dracula’s castle at the beginning of the movie he is no longer a clueless real estate agent but a vampire hunter and scholar instead. We learn that Harker has accepted a job working in the Count’s library as a mere pretext for gaining access to the title bloodsucker’s home in the hopes of vanquishing him. Dracula (Christopher Lee), however, is on to Harker and ends up subjugating him first. The vampire hunter’s partner, Dr. Van Helsing (Peter Cushing), soon arrives hot on Harker’s heels to investigate. In addition to this tidier exposition, the Hammer version also dispenses, after its opening scene, with the first-person narration of Stoker’s epistolary novel and even some of the book’s most important supporting characters (e.g., everyone’s favorite bug-eating maniac, Renfield). More importantly, Fisher’s movie, while retaining the novel’s 19th century setting, clearly uses Stoker’s story as a means of commenting on the still-stifling social mores of post-war Britain. The filmmakers certainly knew what they were doing when they cast the sensual and charismatic Lee as Dracula and the stuffier, more reactionary-seeming Cushing as Van Helsing. (For an in-depth account of how Hammer presents the Count as an ambiguous “counter-cultural hero,” largely because of the sexually liberating effect of his attacks on his seemingly willing female “victims,” check out Pete Hoskin’s brilliant essay at Gary Tooze’s invaluable site DVD Beaver). 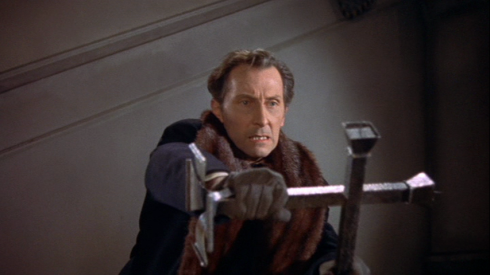 Now on to the good stuff: the 20 seconds of previously unseen footage is confined to just a few shots in two scenes. And yet what a difference 20 seconds can make! The censored scenes in question are Dracula’s seduction of Mina Holmwood (Melissa Stribling), the aforementioned “sensuality,” and Dracula’s daylight disintegration, the aforementioned “gore.” The earlier scene makes explicit something viewers had previously only strongly suspected — that Mina, like all of Dracula’s female victims, actually enjoys the Count’s nocturnal visits. While this sensuality is latent in both Stoker’s novel and in Murnau’s Nosferatu (check out the way Greta Schröder’s Ellen flings the window open to offer herself to Max Schreck’s Count Orlok), it really comes to the fore in the Hammer version — and now more than ever in the new restoration. The seduction scene now contains a single new shot of Dracula “kissing” Mina by lightly brushing his lips all over her face before moving in to bite her neck. The angle of this shot favors Mina’s facial expression, which is undeniably one of erotic ecstasy. Even more tantalizing for longtime fans of the movie, however, is the restoration of several shots to Dracula’s death scene. This new footage includes gruesome images of Dracula clawing at his own disintegrating face with his disintegrating left hand as sunlight streams in through a nearby window. A short documentary titled Resurrecting Dracula, one of many welcome extras on Lionsgate’s Blu-ray, shows how British restorers worked a veritable miracle in cleaning up and re-integrating these shots, fairly seamlessly, from the badly damaged Japanese source reels. 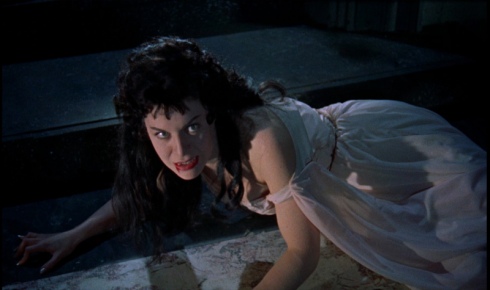 About the transfer: in another extra in this set, Hammer historian Marcus Hearn says that the studio’s successful formula was not only combining horror and sex but also “color.” Hammer’s celebrated use of lurid Technicolor, which on American home video releases has always skewed too warm (especially where skin tones are concerned), is finally being presented here in a cooler, more blue-ish color scheme that more closely corresponds to the look of IB Technicolor prints of the late 1950s. This has the effect of making the color red, when it does periodically appear, pop out all the more. (Blood, as seen in the celebrated opening credit sequence that ends with the substance ominously dripping onto a grave, has the same stylized “red paint” quality that Godard would employ in Weekend a decade later.) Another welcome facet of Lionsgate’s release is that Dracula is presented in its correct aspect ratio of 1.66:1, allowing viewers to see more information, especially in Bernard Robinson’s handsome period sets, on either side of the frame. The thickness and depth of the images in this transfer are extremely impressive overall, boasting the kind of healthy black levels and wonderful film grain textures that one has come to expect from good Blu-ray releases. Image quality is also thankfully matched by the audio in a linear PCM mono track that shows off composer James Bernard’s powerful Wagnerian score to great effect. Another classic movie has gotten the Blu-ray presentation it deserves: Dracula has truly been resurrected.

The trailer for the BFI’s 2007 restoration of Dracula can be seen via YouTube below:

Filmmaker, author and Film Studies instructor. END_OF_DOCUMENT_TOKEN_TO_BE_REPLACED
This entry was posted on Monday, May 6th, 2013 at 7:15 am and tagged with Dracula, Horror of Dracula, Terence Fisher and posted in Blu-ray/DVD Reviews, Film Reviews. You can follow any responses to this entry through the RSS 2.0 feed.
« Celluloid Flashback: Martin Scorsese’s Casino
The Last Ten Movies I Saw »