Now Playing: Top of the Lake 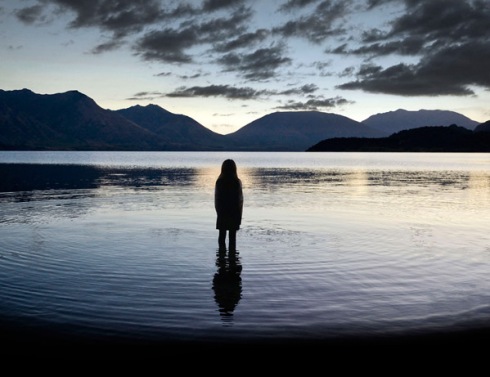 Recently finishing a five-week run on the Sundance Channel, and scheduled for release on Blu-ray and DVD before the year is over, is the seven-hour miniseries Top of the Lake. This gripping, superior police-procedural was co-directed by New Zealand/Australian filmmakers Jane Campion and Garth Davis (they each directed different episodes, with the more well-known Campion helming the first two as well as the fourth and last installments), and based on an original script by Campion and Gerard Lee (Sweetie). The story chronicles the investigation of a missing 12-year-old girl by a big-city Australian detective in rural New Zealand, but the series has much more on its mind than than the mere solving of a mystery. Along with next month’s HBO premiere of Steven Soderbergh’s hotly anticipated Liberace biopic, Behind the Candelabra, this is yet further evidence that smart filmmakers are increasingly turning to long-form television to realize ambitious projects — and are blurring the lines between television and film in the process. (And who can blame them? Virtually no one saw Campion’s last feature, the underrated John Keats biopic Bright Star.) While Top of the Lake may have first been experienced by most people as a “T.V. show” over a span of five weeks, it also received an unusual world premiere on the “big screen” during the Sundance Film Festival over the course of a single day in January. Make no mistake about it: this triumphant serial deserves to be called a “seven-hour movie” as much as Louis Feuillade’s legendary Les Vampires. 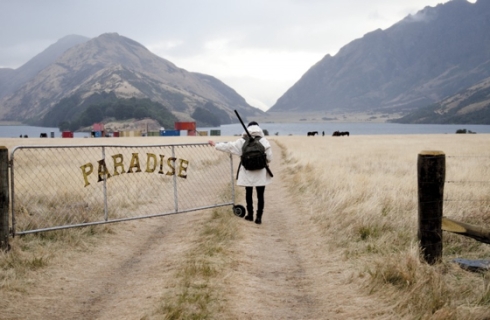 Top of the Lake begins with a haunting and already much-lauded scene in which a 12-year old girl, Tui Mitcham (Jacqueline Joe), walks into the middle of a cold lake, stopping when the water is chest-deep, for no discernible reason. After being rescued and sent to a hospital, it is discovered that the girl is five-months pregnant. Australian police detective Robin Griffin (a revelatory Elisabeth Moss) happens to be visiting her sick mother nearby and, because she has experience dealing with childhood sexual abuse cases, is brought in to interview Tui. The girl refuses to name the father, however, and shortly thereafter disappears. Griffin sticks around to help out with what has by now turned into a missing persons case. This plot is deftly intertwined with several other story threads, including one involving an American spiritual guru named GJ (the awesome Holly Hunter, reuniting with Campion for the first time since The Piano 20 years ago) who has built “Paradise,” a retreat for traumatized women, on a mountain near where Tui disappeared. GJ comes into conflict with Tui’s father, Matt (Peter Mullan), a violent Scottish emigre who believes the land on which Paradise was built is rightfully his. Meanwhile, Griffin repeatedly butts heads with the local-yokels, some of whom accuse her of being a “lesbian,” a “feminist,” or both. Also not making Robin’s life easier is the local police department, personified by Sergeant Al Parker (David Wenham) whose attitude towards the young female cop seems to alternate between the deliberately unhelpful and the downright sinister. 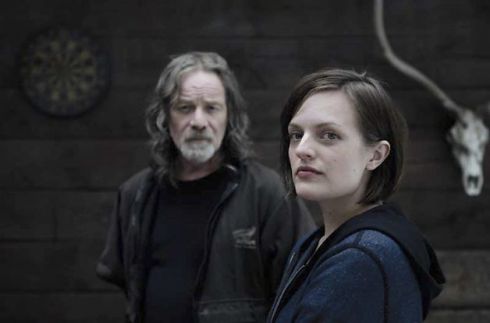 The filmmakers’ grand ambitions, not hemmed in by a feature-length running time, become apparent as these various plot lines slowly converge against a backdrop of astonishingly scenic beauty. The way they use Moss’ detective-figure as a kind of audience-surrogate to introduce viewers to not one but several mysteries in a seemingly idyllic backwater populated by eccentrics has caused many critics to compare the series, favorably, to David Lynch and Mark Frost’s Twin Peaks. But this ignores Top of the Lake‘s aggressive ideological thrust, which depicts the New Zealand bush as a place not just of natural wonder, as one would expect, but also as the breeding ground for a culture of disturbing sexual violence. If anything, I was reminded more of Kathryn Bigelow’s Zero Dark Thirty, which features a similarly tense girl-in-a-boy’s-club dynamic among its characters (not to mention a lead actress whose pale blue eyes one might want to similarly linger on). But what remains largely on the level of subtext in Bigelow’s film becomes virtually the whole show in the capable hands of Campion and Davis. The battle-of-the-sexes is everywhere in Top of the Lake: most obvious in Tui’s statutory rape and in the condescending sexist attitudes that Griffin repeatedly encounters but also in the subplot of Griffin’s sick mother, who is a victim of domestic violence, and in the general hostility of the local men towards Paradise. It should be noted that GJ, who sports Campion’s long silver hair, runs her retreat without a “timetable” or a “structure,” like a film director gone rogue. 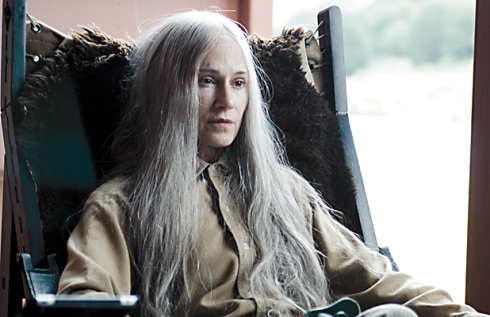 Top of the Lake‘s portrait of rural New Zealand is fascinating. The locations — all low-hanging clouds, verdant forests and lake surfaces like polished silver — are gorgeously photographed by ace cinematographer Adam Arkapaw (Animal Kingdom) and, if not for the unsavory backwoods types who populate them, could almost serve as an advertisement for the country’s Tourism Bureau. But Campion has also always been a masterful director of actors; as in Todd Haynes’ Mildred Pierce, this series ultimately belongs to the performers, who use the expansive running time to “go deep” with their characters in a way that theatrical movies simply do not allow. Moss’ Griffin comes across as being tough as nails in the early episodes before gradually peeling back emotional layers to reveal a vulnerable core, while Hunter is clearly having a ball as the charismatically enigmatic guru GJ (talk about purposeful “star casting”). We are keenly aware that Matt Mitcham, GJ’s doppelganger, is capable of anything from the get-go and Peter Mullan’s explosive performance keeps us on edge throughout. We know this guy is bad enough to kill but is he bad enough to rape and kill his own daughter? For that matter, are any of his three grown sons? (The other main suspects in the case, they are played by the superb trio of Kip Chapman, Thomas M. Wright, and Jay Ryan.)

While the series’ twisty plotting — including not one but two 11th hour surprise revelations that I didn’t see coming — and “neat” ending have drawn criticism from some reviewers, I will counter by arguing that Top of the Lake is finally more about emotions than story. Just as Vertigo and Shutter Island hold up well upon re-watching — even after one knows their “twists” are coming — because they still provide a potent nightmarish immersion into an ocean of feelings (obsession, guilt, fear, etc.), so too does Top of the Lake allow viewers, first and foremost, the cathartic experience of luxuriating in an atmosphere of righteous anger and sorrow. How refreshing it is that the world’s greatest feminist director (a designation that doesn’t necessarily put Campion in competition with other great female directors like Bigelow or Lucrecia Martel) insists that sexism still matters, and boldly uses the ostensibly entertaining form of the mystery-thriller genre to do so. Perhaps this is what Amy Taubin had in mind when she recently called Top of the Lake the “toughest, wildest picture” that Campion has ever made. And how depressing it is that no U.S. filmmakers are similarly willing to go there. For many American viewers, who live in a culture with its own tradition of sexual violence, and in an age when social media allows a depressing phenomenon like “rape apology” to go viral, it must seem that some things happen only in real life — not in the movies. Nor on television.

I understand Top of the Lake is now streaming on Netflix Instant for those of you who do that sort of thing. You can watch the trailer on YouTube below:

Filmmaker, author and Film Studies instructor. END_OF_DOCUMENT_TOKEN_TO_BE_REPLACED
This entry was posted on Monday, April 22nd, 2013 at 8:04 am and tagged with Garth Davis, Jane Campion, Top of the Lake and posted in Film Reviews. You can follow any responses to this entry through the RSS 2.0 feed.
« Filmmaker Interview: Fernando Lavanderos
The Last Ten Movies I Saw »

33 responses to “Now Playing: Top of the Lake”