Now playing in wide release is Spring Breakers, the fifth feature film by Harmony Korine. A couple of my students who saw it before me warned me that although they found it “visually beautiful,” they also thought “the story was terrible.” While I know what they mean, I think they are also missing the point and perhaps even inadvertently paying the movie a compliment; the “story,” such as it is — four college girls rob a fast-food restaurant to finance a spring break trip to St. Petersburg, where their involvement in criminal activity escalates after meeting a rapper/drug dealer — is so thin it’s barely there. But a more story-driven Spring Breakers would resemble many of the wannabe-edgy indie films already saturating the marketplace. Korine, like David Cronenberg in Cosmopolis, is up to something more daring and subversive. In any event, anyone expecting traditional storytelling or characterization from a Harmony Korine film is, as Billy Wilder might say, barking up the wrong fish. The weakest aspect of Spring Breakers, by far, is its exposition, which is also where it feels most like a “normal movie”: early scenes introduce the four girls — Candy (Vanessa Hudgens), Brit (Ashley Benson), Cotty (Rachel Korine) and Faith (Selena Gomez) — and show them pooling their money, lamenting their lack of funds and plotting the robbery, but these scenes feel obligatory and unconvincing. The robbery scene itself, shot through the windows of the restaurant from a moving car in a single long take that recalls the heist in Joseph H. Lewis’ Gun Crazy, is formidable. But it isn’t until the spring breakers arrive in Florida that the film starts to become great. This is in part because of how the editing rhythms grow increasingly non-narrative and abstract, and in part because of the arrival of James Franco as the rapper/drug dealer known as “Alien” — a gonzo Method performance that ranks as the actor’s finest to date. 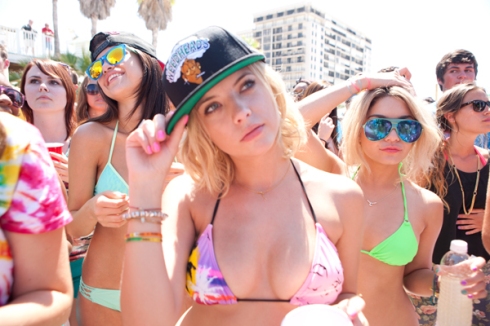 Like all of Korine’s films, Spring Breakers has sharply divided critics. The most common complaints leveled against it are that it is immoral (one well-known online critic recommended registering as a sex offender after watching it), lacking in substance or needlessly and tediously repetitive. While all of these criticisms are stupid, they have also unfortunately sent the movie’s supporters too far in the opposite direction in making claims for its greatness and profundity: some positive notices have interpreted the dire financial straits that lead the girls to robbery as some kind of incisive commentary on the current U.S. economy, and one Film Comment reviewer goes much further, claiming the film is nothing less than a statement about the decline of Western Civilization. I would put myself squarely in between these two positions, finding Spring Breakers mostly interesting as an unusually intoxicating piece of eye and ear candy: it’s like a very pleasant 94-minute fever dream or drug experience — with saturated, primary colors (Korine told his cinematographer he wanted the images to resemble pop music or Skittles candy), a trippy electronic score (courtesy of Cliff Martinez and Skrillex) and non-linear editing all combining into an impressive impressionistic swirl. And I found the deliberate repetition and reshuffling of certain shots and lines of dialogue, especially Alien’s creepy incantatory chant of “spraang breeaak . . . sprang break for-ev-ah,” to be one of Korine’s most appealing aesthetic choices; this candy-colored artsploitation fantasia, like no movie I can think of since Wong Kar-Wai’s Chungking Express in 1994, achieves the sheer repetitive catchiness of a terrific pop song.

The film’s other great strength is James Franco, an actor I’ve never paid much attention to in the past, but who explodes onscreen here in a way that has to be seen to be believed. The very look of Alien is extraordinary: he wears his hair in long cornrows, sports platinum grills and prison-tattoos, and has a ridiculously gaudy wardrobe that looks like a grotesque parody of a gansta-rapper. But his charismatic line deliveries are even more striking. (Franco has cited a couple of underground rappers as the inspiration for his performance but the semi-disturbing way he drawls through a permanent grin seems to recall Willem Dafoe in Wild at Heart as well.) “Why y’all actin’ ‘spicious?” he asks the girls after bailing them out of jail and imploring them to go for a ride in his car. Pretty soon all of the girls, except for the goody-two-shoes Faith (who beats a hasty retreat back home), are seduced by Alien’s hustler lifestyle, with its promise of easy cash and materialism. Alien, in turn, sees the girls as his muses — he calls them his “three mermaids” — and it’s not long before he’s recruited them to be soldiers in a war against his nemesis “Big Arch” (rapper Gucci Mane), St. Pete’s reigning drug kingpin. For the most part, the actresses playing the girls hold their own with Franco. Gomez as Faith has a couple of affecting scenes where she cries real tears, and Hudgens and Benson are creditable as the aggressive bad-girl duo of Candy and Brit; in one particularly memorable sequence, they make Alien fellate the barrels of their loaded guns, which turns him on (“Y’all are my motherfuckin’ soulmates!). The one weak link in the cast is Rachel Korine, whose character, Cotty, feels the least coherent of the four, and surely it’s no coincidence that, as the director’s wife, she also has to bear the brunt of appearing in the most exploitative scenes. 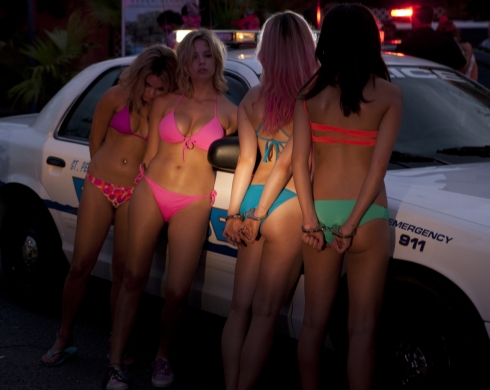 Many critics have noted that some aspects of the film seem to allude to F. Scott Fitzgerald’s The Great Gatsby, including one astonishing scene in which Alien delivers a monologue that begins “Look at my shit!” and then proceeds to inventory his most prized possessions for the girls’ benefit. (The roster, hilariously, includes not only his guns and clothes but also “blue Kool-Aid,” “Calvin Klein Escape” and “Scarface on repeat!”) This scene is a kind of unhinged modern-day update of the celebrated passage in Fitzgerald’s novel where Jay Gatsby, always mindful of the impact of his possessions on Daisy, throws dress-shirts of every style and color around the room. It is in moments like this — as well as in the inspired use of a Britney Spears song to accompany a robbery montage — where Korine’s true motives become clear: he is satirizing what he sees as empty and soulless about contemporary American pop culture. This would be far easier for more viewers to swallow, however, if Korine were less ambivalent in his critique. He doesn’t merely want to criticize his young female characters for being vapid; he wants to party with them as well, and shows their quest for fun as containing a legitimate desire for some kind of spiritual transcendence. Because this is the case, the film ends on a note that is simultaneously improbable, ridiculous and sublime. (Without giving anything away, it is also, as an action set-piece, more satisfying and coherent than any comparable scene in Django Unchained.) How one ultimately feels about Spring Breakers probably depends on the extent to which one finds Korine’s seemingly contradictory impulses hypocritical. One thing, however, is for damn sure: watching Leonaro DiCaprio flinging his shirts around in 3-D is going to seem awfully lame in comparison. Spring break forever, bitches.

Check out the red band Spring Breakers trailer on YouTube below:

Filmmaker, author and Film Studies instructor. END_OF_DOCUMENT_TOKEN_TO_BE_REPLACED
This entry was posted on Monday, April 1st, 2013 at 9:51 am and tagged with Harmony Korine, Spring Breakers and posted in Film Reviews. You can follow any responses to this entry through the RSS 2.0 feed.
« Manoel de Oliveira’s The Cannibals at Facets Night School
The Last Ten Movies I Saw »