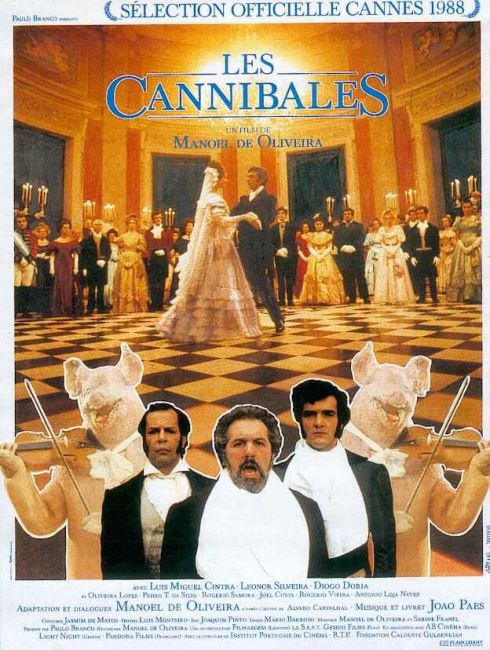 On the evening of Saturday, April 27th I will be presenting Manoel de Oliveira’s The Cannibals at Facets Multimedia as part of their popular Night School series. This will include a short talk about the film as well as a Q&A afterwards. Any of my students who attend the screening can earn up to TWENTY points extra credit. Refer to the extra credit page of your course website for the exact details. Admission is FREE for Facets members and a lowly $5 for non-members. More information, including directions and ticket info can be found here:

Here is the description of the presentation I wrote for the Facets website:

The Cannibals (Os Canibais) is one of the best but unfortunately least-known feature films by prolific Portuguese master Manoel de Oliveira. Made in 1988 when the still-active writer/director was a comparatively youthful 79-years old, this delightful work of anti-bourgeois Surrealism is a kind of freakish filmed opera in which every line of savage satire is sung. Adapted from a novel by Álvaro Carvalhal, the plot concerns Marguerite (Oliveira’s favorite leading lady Leonor Silveira), a high-society woman who marries a wealthy Viscount (Oliveira’s favorite leading man Luis Miguel Cintra) over the objections of her jealous ex-lover, Don Juan (Diogo Doria). On their wedding night, the Viscount reveals to Marguerite his darkest secret, which leads to a devilish, uproariously funny climax that must be seen to be believed.

Adding a layer of self-reflexive fun is an omniscient, singing narrator (Oliveira Lopes); at one point, he hilariously complains about the protagonists’ use of the “sententious language of poor melodrama” in the previous scene. Imagine an unholy mash-up of Luis Bunuel’s The Exterminating Angel and Jacques Demy’s The Umbrellas of Cherbourg and you will have some idea of what is in store at this screening of one of the all-time great Portuguese films. Note: The Cannibals has never received an official home video release in North America. This rare screening of the film will be shown via digital projection of a European import DVD.

If you are unfamiliar with Oliveira, check out this lovely video tribute (which includes excerpts from The Cannibals) via YouTube: