Like many cinephiles with a massive home video collection, I am also a collector of movie posters. Unfortunately, my “teacher’s salary” has not really allowed me to indulge the latter habit to the extent I would like. Nonetheless, I thought readers of this blog might be interested in seeing some of the movie posters in my home and reading about how, when and where I acquired them.

The English language title of Godard’s belated 1991 sequel to his popular 1965 film Alphaville doesn’t make a whole lot of sense. That’s because “Neuf” in French translates as either “nine” or “new.” A more accurate translation of the French title, Allemagne 90 neuf zéro (which riffs on the title of Roberto Rossellini’s Germany Year Zero while also alluding to 1990 — the year Godard made his film), might be something like 1990: Germany Year New Zero. Nonetheless, this is my favorite movie poster because of its rarity. I acquired this at Facets Cinematheque in the mid-Nineties when Godard’s film received an unlikely theatrical run in 35mm from an outfit named “Drift Releasing” (who, needless to say, went under long ago). They were selling these posters for ten dollars in the lobby. How rare is it? I’ve never even seen one available for sale online.

This was a gift from my lovely wife who purchased it on Etsy. Many were the times I gazed up at it while working on my forthcoming book Flickering Empire, in which Chaplin is prominently featured.

For any Chicagoans looking for recommendations on where to get their own posters framed, I recommend Lake View Art Supply — whose handiwork can be seen above. (Ask for Ethan!) For good, reasonably priced online framing, I recommend Wholesale Poster Frames (http://www.wholesaleposterframes.com/).

Godard again. This is not an original poster from 1965 but a reproduction from the 1970s. I purchased it in Paris in 1995 when I was a wee lad of 20-years-old. I can’t remember how much I paid for it but I know that it cost considerably more than the reproductions below but considerably less than the whopping $295 it’s currently going for on ebay. 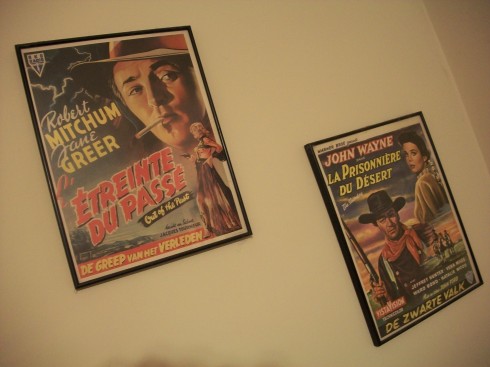 Okay, these are reproductions I got in Paris at the same time I got the Pierrot le Fou poster. You can find these (and others similar to them for various “Golden Age” Hollywood films) online for cheap. However, I still really like the bright colors and the overall design. And the fact that the titles are written in Dutch.

Filmmaker, author and Film Studies instructor. END_OF_DOCUMENT_TOKEN_TO_BE_REPLACED
This entry was posted on Wednesday, March 20th, 2013 at 8:13 am and posted in Reminiscences. You can follow any responses to this entry through the RSS 2.0 feed.
« Now Playing: You Ain’t Seen Nothin’ Yet
The Last Ten Movies I Saw »