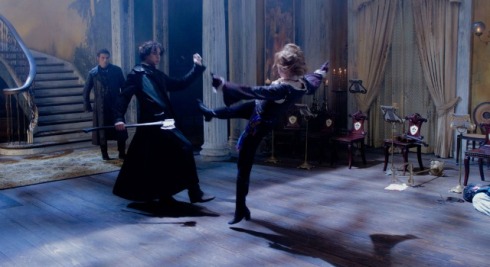 Abraham Lincoln: Vampire Hunter received nearly unanimous critical pans when it was released in theaters last summer. Perhaps a lot of those critics tuned out as soon as they heard the movie’s admittedly ridiculous title, with some of them already even thinking about the more reverential Spielberg/Day-Lewis treatment they knew was waiting in the wings. Among the few positive notices: Suzi Doll praised the film’s “rich subtext” in a post at TCM’s Movie Morlocks site, and a capsule DVD review in the most recent issue of Film Comment makes it their “CGI Spectacle Pick,” calling it a “good bad movie.” AL:VH begins with a solemn voice-over, by the fine lead actor Benjamin Walker, intoning that “History prefers myths to men . . .,” a sly acknowledgment of the myth-making involved in all Presidential biopics. It isn’t long, however, before the film’s tone quickly and gleefully switches to one of cartoonish mayhem. While AL: VH is obviously, to put it mildly, a “low-brow” entertainment, there’s also no denying that it was directed in high-style. Director Timur Bekmambetov’s deft use of expressionist lighting and blue-tinting conjures up a consistently fun Gothic atmosphere, and his action/horror set-pieces recall the best traditions of American action filmmaking: a fist-fight on top of a train occurs while the train travels over a bridge that’s in the process of collapsing, a scene that merges iconic action movie moments that were first depicted in the silent era (The Great Train Robbery and The General, respectively).

There’s nothing nearly as fun nor as cinematic to be found in Steven Spielberg’s Lincoln, which boasts a typically excellent Method performance from Daniel Day-Lewis but one that curiously feels as if it has been plunked down in the middle of a filmed stage play about Thaddeus Stevens. Remember what your high-school English teacher said about looking at how characters change in order to know what a story is about? Well, Stevens is the only character who changes. In fact, he’s the only character who comes across as coherent. For all of DDL’s impressive immersion tactics, he finally can’t transcend the way Tony Kushner’s script presents the Great Emancipator as little more than a collection of sometimes-contradictory traits (notice how Lincoln always has just enough time to finish a joke – “he was human too, you see!” – before another character bursts into the room to announce a dramatic new plot development). Lovers of good acting will want to see Lincoln for the strong ensemble cast but it’s also typical Spielberg all the way: overly sentimental, earnest, dull and stodgy. It’s full of the most transparent manipulation tactics: big John Williams music cues and shots where the camera dramatically dollies into close-ups of characters’ faces. Unfortunately, unlike Bekmambetov (not to mention John Ford), Spielberg just isn’t smart enough to acknowledge that he’s also “printing the legend.” If AL:VH is a “good bad movie” then I say Lincoln is a “bad good movie,” and I will always prefer the former to the latter.

Filmmaker, author and Film Studies instructor. END_OF_DOCUMENT_TOKEN_TO_BE_REPLACED
This entry was posted on Sunday, December 16th, 2012 at 11:56 am and tagged with Abraham Lincoln: Vampire Hunter, Lincoln, Steven Spielberg, Timur Bekmambetov and posted in Film Reviews, Odds and Ends. You can follow any responses to this entry through the RSS 2.0 feed.
« The Last Ten Movies I Saw
2012: The Year of the Hitch »

9 responses to “Odds and Ends”