Following my French cinema primers covering the Nouvelle Vague and the pre-Nouvelle Vague sound era, today’s post covers what I think are the most essential French movies of the silent era. Although I normally only write about feature films in these primers, I’m going to make an exception for this one so that I can cover some of the most influential French films of the era.

Bertrand Tavernier has referred to this Lumiere Brothers masterpiece as the “first horror movie” because, as legend has it, early audiences reacted to the image of a train moving towards the camera by fleeing in terror. This is a simple “actuality” that depicts just what the title states in a single shot lasting approximately 42 seconds. But it’s also a good example of how well made the Lumiere Brothers’ films were: the dramatic contrast of the black and white cinematography, coupled with the diagonal perspective of the composition, makes the film an aesthetically pleasing experience even when viewed today. It can be seen in its entirety on YouTube by clicking the image above.

Georges Melies was the polar opposite of the Lumieres; he made narrative films in the fantasy genre that showcased trick photography and special effects. He also shot all of his movies in an ingeniously constructed glass-walled studio in Paris. Melies’ most famous film is A Trip to the Moon, a 14-minute sci-fi adventure about astronomers making a maiden moon voyage, where they do battle with the moon’s alien inhabitants before triumphantly returning to earth. This gained renewed fame when it became a major reference point in Martin Scorsese’s Hugo and was subsequently re-released in a splendidly restored color version. I’m including a link to a YouTube video above but please note that the image quality here is far inferior to what you will find on the magnificent Flicker Alley blu-ray released earlier this year. 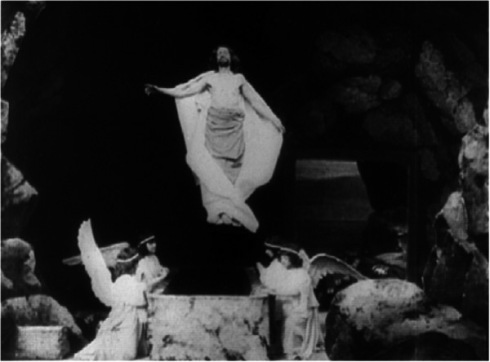 Alice Guy, a true movie pioneer, began her directing career in 1896 and is sometimes credited as the first person to make a narrative film (as opposed to Lumiere-style actualities). A DVD compilation of her work released by Kino in 2009 is a revelation: it contains stunt comedies, panoramic views of exotic places, and fascinating early experiments with sound and color. My favorite of her films that I’ve seen is The Life of Christ, which recounts “the greatest story ever told” in 25 single-shot tableaux-like scenes that, at 33 minutes, made it relatively epic in 1906. Especially effective is the climactic resurrection, which is bolstered by a beautiful score on Kino’s DVD. This is my second favorite Jesus movie after Pasolini’s.

Also included in Kino’s “Gaumont Treasures” DVD set is a an entire platter devoted to Leonce Perret, an important director previously unknown in the States. The major revelation of the set is A Child of Paris, a feature film from 1913 that is shockingly sophisticated in terms of its cinematography (including the kind of camera movements and oblique compositions that wouldn’t become commonplace for years to come). The Dickensian story concerns a little girl who becomes an orphan, is sent to a boarding school, runs away and then is kidnapped by a gang of thieves. The acting is surprisingly naturalistic for the time and the use of real locations – in Paris and Nice – is impressive in the extreme.

The brilliant, prolific Louis Feuillade directed over 600 movies, many of them multi-part serials, before his death at 52. Les Vampires, which is not about vampires but rather a gang of nocturnal thieves who call themselves “The Vampires,” is one of the highlights of his career. The leader of the gang is a woman named Irma Vep (played by the ferocious, outrageously sexy actress Musidora) who finds herself matching wits with ace newspaper reporter Philippe Guérande and his comical sidekick Oscar Mazamette. This was much beloved by the Surrealists for its evocation of an elaborate criminal network festering beneath the surface of mainstream bourgeois society as well as, one presumes, a capture-and-escape narrative loop structure that stands in opposition to the typical closure of Hollywood. Nearly a hundred years later, this 10 part mystery serial has lost none of its power to entertain for the entire duration of its nearly 7 hour running time. 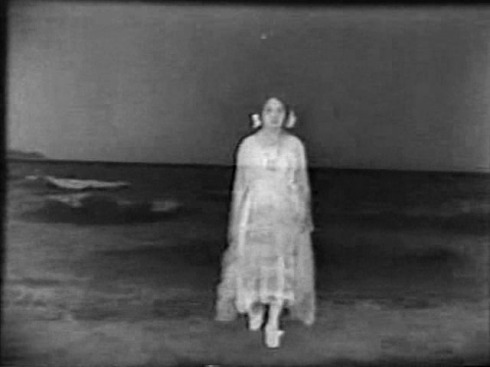 Jacques d’Athys, a French adventurer, returns to his home in Nice after an expedition to Indochina where he has picked up a Eurasian fiancee and a book that, unbeknownst to him, contains a coded message revealing the whereabouts of both secret treasures and sensitive government intelligence. This makes him the target of foreign spies, including a Marquise of mysterious Latin origin, a Hindu hypnotist and an evil German doctor, who will stop at nothing to obtain the book. Louis Feuillade’s 12 chapter, 7 hour serial is overflowing with action, thrills, humor and romance, and is a strong contender for the title of the most purely entertaining movie that I have ever seen from any era.

My favorite French silent feature is Jean Epstein’s Impressionist masterpiece about a young woman, Marie, whose cruel foster parents force her into a marriage with an unemployed, alcoholic thug ironically named “Petit Paul.” Marie nonetheless continues to pine for her true love, Jean, a local dockworker. This romantic triangle is infused with sublime visuals from beginning to end (including a highly poetic use of superimpositions, rapid-fire cutting and close-ups) that make the film a crushing emotional experience when viewed today. The famous merry-go-round sequence, with its striking imagery and musical rhythms, is one of the glories of the silent cinema.

Dmitri Kirsanoff’s astonishing 38 minute short is arguably the most modern-looking film produced anywhere in the silent era. The story, told without intertitles, revolves around two sisters who, as children living in a small town, tragically witness their parents being murdered. Then, Kirsanoff flashes forward to years later as both sisters are living in Paris and become involved with an evil seducer. But no plot description can do justice to the way Kirsanoff uses his camera like a paintbrush to capture images of incredible beauty and emotional depth. The film’s tempo ranges from fast, Soviet-style montage to a deliberately arty languorousness depending on the mood of the characters, and contributes to an atmosphere of almost unbearable intensity. Finally, there is the brilliantly understated lead performance of Nadia Sibirskaïa (Kirsanoff’s wife) who, in the film’s most celebrated scene, contemplates suicide before changing her mind when a complete stranger offers her bread in a public park. Ménilmontant is on my short list of near-perfect movies.

First, I must confess to having only seen this on VHS tape in a controversial restoration overseen by Francis Ford Coppola that was both incomplete and transferred at the wrong speed. The arguably nationalistic and pro-militaristic content of the film also strikes me as somewhat dubious. But . . . as an insanely gargantuan, impossibly ambitious work of pure cinema, this has few equals. Gance’s film begins with Napoleon as a child engaging in a snowball fight at a military academy and proceeds through many visually astonishing episodes before climaxing, unforgettably, with a three-panelled widescreen sequence that shows Napoleon at the height of his powers invading Italy as the head of the French army. One of my fondest cinephiliac desires is that silent historian Kevin Brownlow’s most recent restoration, which has now swelled to five and a half hours, will make its way to blu-ray soon.

Although it wasn’t until the sound era that Jean Renoir directed the films that made him immortal (e.g., Grand Illusion and The Rules of the Game), I think The Little Match Girl, a 40 minute adaptation of a Hans Christian Anderson story, is one of his best and most affecting films. The title character is a waif forced to sell matches on the streets in the dead of winter in order to earn her livelihood. While literally freezing to death, the match girl looks through a toy store window and fantasizes that she is inside and that the toys have magically come to life all around her. The dream-like visuals and fantasy element are atypical for Renoir, the humanism is not.

After a successful run of films in his native Denmark, Carl Dreyer headed to France for his last silent film, a beautiful dramatization of the life of the beloved saint. Instead of showing Joan’s heroism in battle the way you would expect a biopic to do, Dreyer focuses instead only on the last days of her life as she is tried and executed by an English court. The film’s most notable characteristic is its relentless use of extreme close-ups, which capture every wrinkle on the judges’ evil faces and every nuance of Renee Falconetti’s highly emotive performance in the title role, which remains one of the finest ever captured on celluloid. 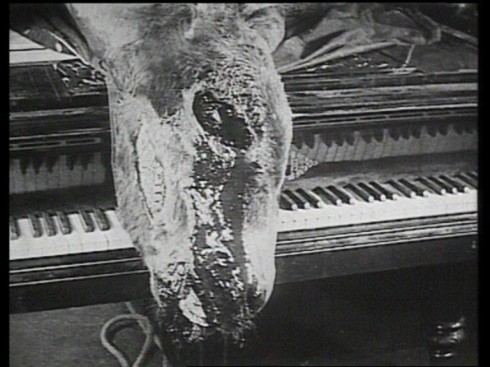 Luis Bunuel’s directorial debut, based on a script he co-wrote with Salvador Dali, is the most famous Surrealist movie ever – and for good reason. It opens with the shocking image of a man slicing a woman’s eyeball with a straight razor (a shot that is graphically matched with a cutaway image of a cloud drifting in front of the moon) before jumping ahead to “Eight Years Later” and focusing on a new set of characters in scenes that are equally bizarre. But, since Bunuel plays the man with the razor, the function of the prologue is obvious: to announce an all-out assault on the viewer, whose sight, after all, is the most important sense in experiencing a film. Bunuel and Dali’s rule when writing the screenplay was that Un Chien Andalou should be nonsensical to the point of not being interpretable; legions of critics and historians, including me, have ignored their intention ever since.

À propos de Nice is the exceptionally promising debut film of Jean Vigo, whose career was tragically curtailed four years later when he died of tuberculosis at age 29. This begins as a conventional “city symphony”-style travelogue of the title locations before expanding its scope to offer surreal stylistic flourishes and a satirical/critical view of Nice’s wealthy citizens. In 25 minutes, Vigo and his ace cinematographer Boris Kaufman offer up more ideas, visual invention and wit than what you see in most features; the slow-motion, low angled shots of women dancing are particularly memorable for their eroticism.