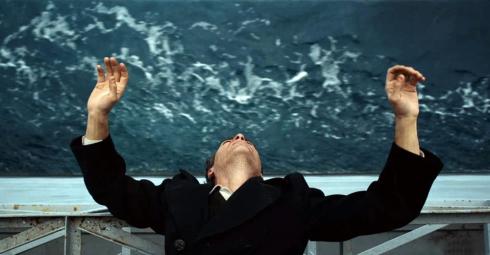 Opening this Friday in fairly wide release is The Master, the sixth feature film from Paul Thomas Anderson and one that firmly establishes the enterprising 42-year old writer/director as the best at work in America today. No? Then who? Setting aside for the moment the great contemporary American filmmakers who don’t typically write their own scripts (e.g., Martin Scorsese, Clint Eastwood, David Fincher, Kathryn Bigelow, et al.), it’s curious to note how most American writer/directors fall into one of two categories: those who are directors first and those who are writers first. The former category consists of the likes of Terrence Malick, David Lynch, Jim Jarmusch and Gus Van Sant, directors who take an image-based approach to cinematic storytelling and write original screenplays mainly in order to give themselves something to direct. Falling into the latter category are the likes of Woody Allen, the Coen brothers, Whit Stillman and Todd Solondz, directors whose films are primarily screenplay-based and who view the act of directing as essentially an extension of the writing process. This isn’t to say that Paul Thomas Anderson is necessarily a greater filmmaker than anyone named above. But, among the rare American writer/directors who can be seen as equally talented across both disciplines, Anderson now strikes me as having the highest combined average (with his stiffest competition coming from Richard Linklater, Quentin Tarantino and Wes Anderson). The Master seems to be at once a “quintessential Anderson” film (i.e., one that revisits signature themes and stylistic motifs) as well as one that stakes out bold new territory and pushes the director to the head of his class. He’s now operating at the level of a mid-period Stanley Kubrick and, amazingly, shows the potential of maturing even further. This is a level of mastery that will probably never be attained by, say, Darren Aronofsky, another “Kubrickian” director whom I do admire. 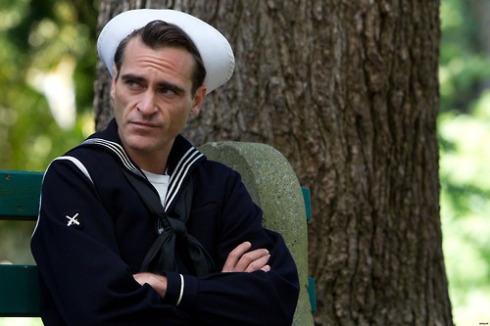 The formidable original screenplay for The Master concerns the rise in popularity of a Scientology-like religion named “The Cause” in the years immediately following WWII. The charismatic guru/con man heading this outfit, and the character for whom the film is named, is Lancaster Dodd, an L. Ron Hubbard stand-in played with great relish by Phillip Seymour Hoffman. Interestingly, Dodd is but a supporting character in a scenario that focuses mainly on a new disciple of the Cause, a returning war vet and tortured soul named Freddie Quell (Joaquin Phoenix in the performance of the year, any year). Freddie is an incurable alcoholic who clearly suffers from some sort of post-traumatic stress disorder, and the early scenes detailing his inability to readjust to civilian life are straightforward and dramatically compelling. Things become trickier and more structurally unconventional after Quell meets and instantly falls under the sway of Dodd in a series of scenes that feel like something out of a fairy tale: Quell becomes a stowaway on Dodd’s luxury yacht while fleeing a manslaughter charge. The two men form an immediate and somewhat mysterious bond as Quell is admitted with curious rapidity into Dodd’s inner circle. Without giving away more of the plot, I should point out that it is reductive and simplistic to refer to The Master as Anderson’s “Scientology movie,” as many have done, since the film was clearly not meant as an exposé of any specific religion (even though Anderson leaves little doubt that Dodd, while painted somewhat sympathetically, is indeed a fraud). What I think Anderson is up to is something closer to a super-ambitious attempt to show the specific circumstances – psychological, social, historical, political – under which individuals are likely to become susceptible to cult-like self-help religions in general. Or at least that’s how The Master struck me after seeing it in 70mm at a rare sneak preview at the Music Box last month. Leaving the theater, I admired the fact that it was probably the most grandiose, challenging and thematically dense film of Anderson’s career, but I must also admit I didn’t find it as instantly engrossing as There Will Be Blood, Boogie Nights or even Punch Drunk Love. (For the record, I think Hard Eight is an auspicious debut, while Magnolia is the only Anderson movie I actively dislike.)

The more time I’ve had to think about The Master however, the greater it seems. While my initial response was to see it mostly as Freddie’s story, I’m now inclined to think of it more as a provocative depiction of the weird, symbiotic friendship between two very different, and in some ways polar opposite, men. Dodd is, in his own words, “a writer, a doctor, a nuclear physicist and a theoretical philosopher” whereas Freddie is the dumbest lead character in any dramatic Hollywood movie in recent memory. Although I don’t share the conviction of some critics that there is anything homoerotic about the bond between Lancaster Dodd and Freddie Quell (sometimes a passionate hug is just a passionate hug), the film nevertheless does present a kind of bizarre love triangle between Dodd, his wife Peggy (Amy Adams) and Freddie. While it’s easy to see what Freddie sees in Dodd (the latter is a typical surrogate father in a series of such characters in the “alternative families” that mark Anderson’s work), the film becomes much richer when one considers what Dodd might see in Freddie. Freddie is a bad boy who lives only for drinking, fucking and fighting, and is therefore unlike anyone else in Dodd’s well-heeled social group. Dodd eagerly drinks Freddie’s poisonous homemade hooch, wrestles with him on the lawn and admonishes him with the phrase “Naughty boy!” in a tone that suggests more envy than genuine resentment. Anderson demonstrates, in a way that rings of psychological truth, how the master needs his servant at least as much as the other way around. If Freddie, then, can be seen as Dodd’s id, it is Peggy who represents the master’s super-ego. She is the Lady MacBeth-like wife, cooing in her husband’s ear while giving him a handjob over the bathroom sink, always trying to spur him and the Cause on to ever-greater heights. Peggy takes the Cause more seriously than anyone, perhaps even more so than Dodd, and thus appears the most wary of the potentially destructive threat that Freddie poses to the group. 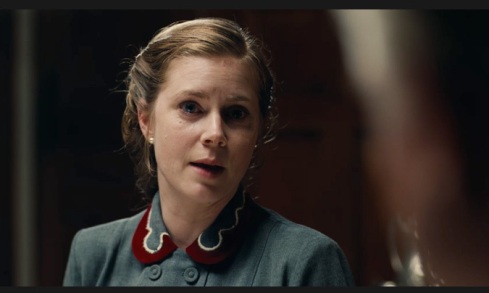 Much has been made about The Master being the first narrative film to be shot (almost entirely) on 70mm film stock since Kenneth Branagh’s Hamlet in 1996. As one would expect, it is a marvel to watch from the first frame to the last. The images have a breathtaking clarity that remind us of the impending tragedy of the obsolescence of actual film as a result of the so-called “digital revolution.” They also made me grateful that if anyone in Hollywood is going to be shooting in 70mm, it’s Anderson. As a director, he has always been an impeccable visual stylist but I think he really outdoes himself here, probably because it doesn’t seem like he’s trying to. While Anderson’s well-known preference for bravura long takes is still very much in evidence (check out the epic tracking shot that follows a mink-coated model through a beautifully recreated late 1940s department store), they are ultimately done in a lower-key register than, say, the ostentatious I am Cuba homages in Boogie Nights. This is not the work of an angry young man determined to set the world on fire. It is the more relaxed mastery of a family man in his early forties with nothing much to prove, the work of a supremely confident artist following his instincts and producing effortlessly audacious results. As a piece of pure cinema, there is an organic, Kubrick-Malick meticulousness to The Master‘s overall visual design that will amaze even those who are less than satisfied with it on a dramatic level. Like it or not, this is a must-see big screen experience. 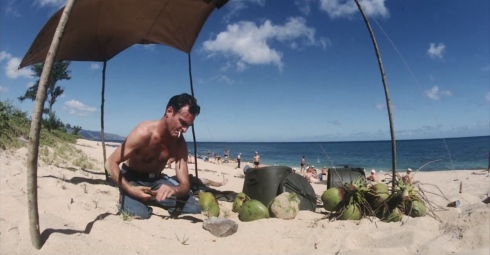 I have said that The Master is structured unconventionally and this may be a curse as well as a blessing. There are two scenes in the film as dramatically electrifying as anything I can recall seeing in a movie theater. The first is a mini-masterpiece of psychological seduction involving Dodd’s “processing” (read: auditing) of Quell, while the other is an explosive confrontation between the same men in adjacent prison cells. Phoenix’s performance in the latter scene is so primal, so animalistic, so beyond the bounds of what we think of as traditional movie acting that it will undoubtedly find a place on many highlight reels: not only those showcasing the best work of Phoenix and Anderson but probably those Great Movie montages on future awards shows as well. Somewhat strangely, these Big Acting Scenes both occur in the film’s first half. Upon first viewing, this made it hard for me not to feel disappointed that there was no comparable Phoenix/Hoffman barnburner in the final act to give the film a stronger sense of dramatic harmony and closure. Instead, we are presented with something more ambivalent and restrained (though I fully get the symbolic significance of Quell accomplishing something in the final scene that he’s wanted but failed to do throughout the rest of the movie); it is essentially the opposite of the galvanizing, exclamation point-like ending of There Will Be Blood. For this and other reasons (the fine Amy Adams is arguably semi-wasted in a role that is less fleshed out than those of her male counterparts), I suspect The Master will be a polarizing movie. But it’s also a film that clearly isn’t revealing all of its secrets on a single viewing and so I’m skeptical of all judgements, including my own, until I’ve had a chance to revisit it. The Master is the first new film I’ve seen since Abbas Kiarostami’s Certified Copy that seems to cry out for multiple viewings. I can’t wait to see it again.