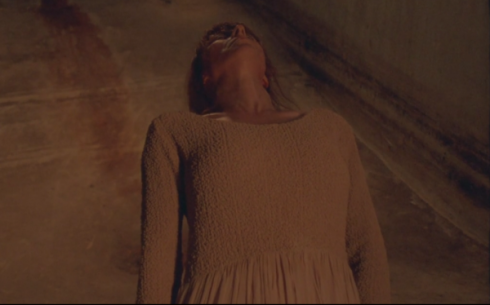 So far, the only films I’ve discussed in my Secret History of Chicago Movies posts have been those produced between the years 1896 and 1953, or roughly the first half of the twentieth century. The reason for this is simple: it’s easier to write about under-appreciated or unknown Chicago movies by digging into the distant past. I’m majorly shifting gears today however to write about an extraordinary new Chicago-shot short film that recently debuted on the web: Melika Bass’ Varðeldur, the latest music video in an ambitious anthology project engineered by everyone’s favorite ethereal Icelandic pop band Sigur Ros. The intriguing concept behind the band’s ongoing series known as the “Valtari Mystery Film Experiment” is that they have commissioned 12 different directors, including such luminaries as Ramin Bahrani, Alma Har’el and John Cameron Mitchell, to make music videos for the eight tracks on their latest album. According to the band’s website, each filmmaker was given the “same modest budget and asked to create whatever comes into their head when they listen to songs from Valtari. The idea is to bypass the usual artistic approval process and allow people utmost creative freedom.”

Melika Bass, readers of this blog may remember, is an internationally acclaimed experimental filmmaker based in Chicago whom I interviewed in 2011. Bass has described her contribution to “Valtari” on her own website as a “film portrait of an unstable entity in a haunted vessel, drawn into and floating away from a siren song.” As that description suggests, it is less of a music video than a legitimate experimental short in which the images happen to interact with the gorgeous instrumental Sigur Ros song “Varðeldur” in ways both direct and oblique. The film, shot on good old Super 16mm stock (oh yeah!), depicts Croatian performance artist Selma Banich doing a kind of interpretive dance to the music in an interior location that looks simultaneously industrial, dilapidated, warmly lit and spartan. Banich, wearing a beige colored sweater and skirt and sporting red hair that curiously fits into an overall graphic pattern with what look like rust stains on the wall behind her, doesn’t dance in the traditional sense so much as explore the space around her by moving her body in an evocative and stylized fashion. At first her movements, like the film’s editing and the song itself, are slow and plodding. At one point, she extends her left hand and begins wiggling her fingers in a manner that seems to correspond to the song’s gently tinkling piano notes. Varðeldur‘s undeniable emotional high point comes later, in two consecutive takes where Banich shakes her head from side to side. As the speed of her head movements increase to a whiplash-like velocity, her image transforms into a sepia smear of shocking abstract beauty. In the film’s penultimate shot, Banich sinks languidly into a shadow in a corner of the frame like a character out of a German Expressionist movie. This is followed by an overhead shot of Banich slowly collapsing to the floor, an appropriate image of finality on which to end this mysterious and strangely poignant film.

I’ll be surprised and pleased if I see a more vital 6 and a half minutes of filmmaking anywhere else for the remainder of this year. You can check out Varðeldur in its entirety below:

Filmmaker, author and Film Studies instructor. END_OF_DOCUMENT_TOKEN_TO_BE_REPLACED
This entry was posted on Friday, August 17th, 2012 at 10:26 am and tagged with Melika Bass, Sigur Ros, Valtari Mystery Film Experiment, Varðeldur and posted in Chicago Movies, Film Reviews. You can follow any responses to this entry through the RSS 2.0 feed.
« “Saint Godard” vs. the Prince of Darkness
The Last Ten Movies I Saw »

6 responses to “The Secret History of Chicago Movies: Varðeldur”