“Saint Godard” vs. the Prince of Darkness

As a postscript to my John Carpenter post from two days ago, below is an intriguing screen capture from the director’s 1987 horror film Prince of Darkness. I was struck by the fact that the creepy church that serves as the movie’s central location was named “Saint Godard’s.” Could Carpenter have a broader frame of cinematic reference than he has typically let on in interviews? Or perhaps he just had a cheeky production designer? Or should the fact that St. Godard’s contains a portal to hell mean that this homage should really be interpreted as an anti-homage? Or is it a humorous comment on the fact that, as far as many film critics are concerned, Godard is a saint while Carpenter is seen as the “prince of darkness”? I’m willing to bet that the first option I posited is closest to the truth; it’s probably just an affectionate homage from one master to another. After all, Carpenter’s mixture of 35mm film stock and video (the latter of which can be seen below) is quite Godardian and was unusual to see in a Hollywood movie at the time. 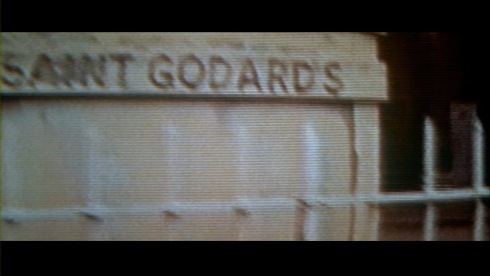 Filmmaker, author and Film Studies instructor. END_OF_DOCUMENT_TOKEN_TO_BE_REPLACED
This entry was posted on Wednesday, August 15th, 2012 at 8:35 am and tagged with Jean-Luc Godard, John Carpenter, Prince of Darkness and posted in Uncategorized. You can follow any responses to this entry through the RSS 2.0 feed.
« He Said/She Said Director Profile: John Carpenter
The Secret History of Chicago Movies: Varðeldur »

10 responses to ““Saint Godard” vs. the Prince of Darkness”