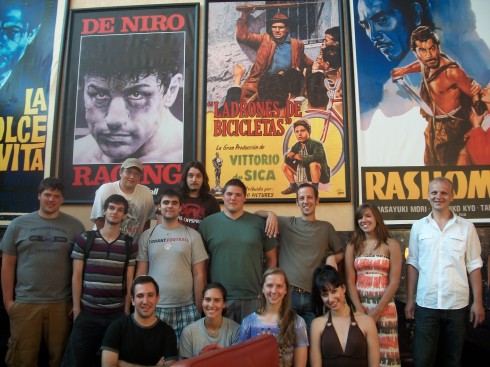 Me and my Intro to Film class before a theatrical screening of Singin’ in the Rain. We went out for overpriced smoothies afterwards. It was all very civilized!

A new 4k digital restoration of Singin’ in the Rain played in movie theaters across the U.S. last Thursday night as a one-time only event sponsored by Turner Classic Movies, which also served as an advance preview of this version’s imminent release on Blu-ray. As part of my never-ending quest to promote the big screen experience, I took my Intro to Film class from Oakton Community College on a field trip to the Century 12 theater in Evanston to take in a screening. Unlike the sparsely attended “Classic Series” showing of The Searchers at the same theater just a couple of weeks ago (to which I had taken another class), I was happy to see that the joint was positively jammed for Singin’ in the Rain, a testament, no doubt, to TCM’s marketing muscle. Unfortunately, the screening was marred by a technical glitch that excised the first several minutes from the climactic “Broadway Melody” number, an error that nonetheless happily resulted in all attendees receiving a free pass to attend a future show at the Century 12. (And is it just me or do these digital “satellite feed” screenings tend to present more technical problems than traditional 35mm?) That minor glitch aside, however, it was indeed a glorious feeling to see Singin’ in the Rain, the most beloved of all Hollywood musicals, on the big screen with beautifully restored sound and color. 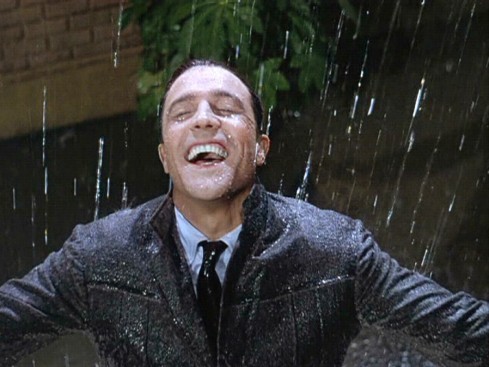 While Singin’ in the Rain is not my personal favorite musical (I’m a Vincente Minnelli man, myself), I do completely understand the case that can be made for Gene Kelly and Stanley Donen’s masterpiece as the very pinnacle of the genre. For one thing, as one of my students noted afterwards, there is an incredible amount of diversity in terms of the different kinds of dancing on display throughout the film: “You Were Meant for Me” is a graceful, deeply romantic, almost balletic number between stars Gene Kelly and Debbie Reynolds, “Moses Supposes” features furious, old-fashioned hoofing between Kelly and Donald O’Connor, while O’Connor’s “Make ‘Em Laugh” solo number functions more as a series of outrageously comedic physical stunts than “dancing” in any traditional sense. And this is to say nothing of Kelly’s dancing during the title song, the most famous production number in any movie musical and a brilliant showcase for the co-director/choreographer/star’s unique genius for interacting with sets and props.

Mirroring this diversity in the choreography is the way Singin’ also functions as a perfect hybrid of the musical, comedy and romance genres. Indeed, out of all the musicals from Hollywood’s golden age, it is the one that probably works best as a comedy. (One of my other students told me he didn’t much care about the singing or dancing in the movie but found it nonetheless thoroughly entertaining purely because of its humor.) The comedy comes primarily from Donald O’Connor, as the eternal comedic sidekick who is given a boatload of genuinely hilarious asides, as well as Jean Hagen as an archetypal dumb blonde whose shrill speaking voice has made a number of Adolph Green and Betty Comden’s lines of dialogue justifiably famous (e.g., “I can’t stan’ ‘im!”). If Kelly, then, exemplifies the film’s musical side, and O’Connor and Hagen bring the comedy, it is Debbie Reynolds, looking almost impossibly young at 18 years old, who provides the romance. While Reynolds, with her patented virginal cuteness, does not, as they say, “do it for me” (I would’ve preferred it had the lead female role gone to the more mature, and leggier, Cyd Charisse, who turns up for a delightful extended cameo), there is no denying the potent romantic chemistry between Reynolds and Kelly. 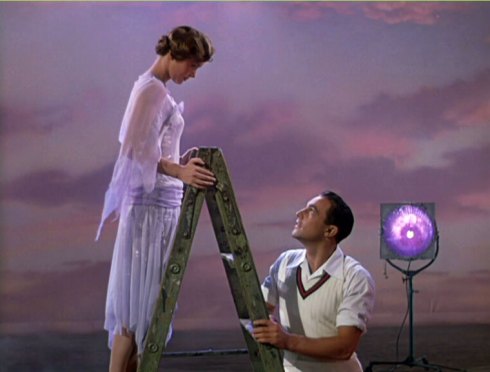 The most important aspect of Singin’ in the Rain that cements its pantheon status though is probably how it serves as a nostalgic valentine to the cinema itself. The film takes place in Hollywood in 1927, a tumultuous era when the movie industry was decisively transitioning away from the production of silent films to that of “talking pictures” for good. The logistical problems that the early sound filmmakers faced are recreated with exaggerated comic panache (e.g., talking into a bush where a microphone is obviously hidden, a microphone picking up a heartbeat, tripping over cables, etc.), prompting Douglas Fowley’s director character (wearing, of course, a beret and “riding pants”) to exclaim, “We’ll have to think of something else!” While these scenes are played for laughs, they also illustrate the very real technical problems with which the industry had to contend, and that indeed had to be solved by creatively thinking of “something else.”

When The Artist was released last year, I was incredulous to see some critics claim that it more accurately captured the magic of silent movies than Singin’ in the Rain (its most obvious influence), because the earlier film allegedly made the silents look “worse” than they really are. I would argue that the opposite is true: while the acting in the silent film scenes within Singin’ in the Rain may indeed be more exaggerated than silent film acting was in actuality, it is crucially no more exaggerated than the acting found anywhere else in Singin’ in the Rain, the tone of which is consistently pitched at the delightfully broad level of vaudeville comedy. I would argue that it is The Artist that tries to point up the supposedly egregious differences between the acting in silent movies (i.e., the movie scenes within The Artist) and “modern day” film acting (all of the other scenes). This is one of the reasons why, although The Artist has its moments as a charming comedy, its attempts to achieve genuine tragedy ultimately make the film feel strained and uneven. In any case, I doubt that The Artist will be rereleased theatrically for its 60th anniversary; by that time it will probably be long forgotten, like most of the other recent Oscar winners, while Singin’ in the Rain will undoubtedly continue to look just as fresh and old-fashioned as ever.

Filmmaker, author and Film Studies instructor. END_OF_DOCUMENT_TOKEN_TO_BE_REPLACED
This entry was posted on Monday, July 16th, 2012 at 6:50 am and tagged with Gene Kelly, Michel Hazanavicius, Singin' in the Rain, Stanley Donen, The Artist and posted in Film Reviews. You can follow any responses to this entry through the RSS 2.0 feed.
« The Last Ten Movies I Saw
Book Publication News »

11 responses to “A Glorious Feeling”