Now playing at theaters everywhere is Prometheus, a much-hyped, surprisingly excellent Alien prequel that offers intelligent, meticulously crafted, beautifully designed riffs on familiar genre elements. 75-year old veteran director Ridley Scott has not made a science fiction film since Blade Runner way back in 1982 and Prometheus at its best is so staggeringly good that it makes you wonder why. Scott has always been a masterful visual stylist and an obsessively detailed director along the lines of a Stanley Kubrick or a David Fincher. Unfortunately, for most of the past 30 years his talents have been squandered on projects that were not worthy of his time or attention. (Gladiator is one of my personal nominees for the worst Best Picture Oscar winner ever and I would rather eat my own brain than have to sit through Hannibal again.) But sci-fi and Scott go together like bacon and eggs as evidenced by Alien and Blade Runner, both of which are now firmly established as classics of the genre, and Prometheus manages to rekindle memories of the best aspects of those movies while also having a few new tricks up its sleeve; Prometheus follows the same basic template of the original Alien (which, unique for its time, was essentially a slasher film that just so happened to utilize sci-fi iconography) while simultaneously asking the big philosophical questions of Blade Runner: Where do we come from? Where are we going? What does it mean to be human?

The plot of Prometheus involves an expedition by a team of scientists to a distant planet, the purpose of which is to investigate the origins of human life on Earth. “Prometheus” is also the name of the ship that takes these characters on the trillion dollar mission, which is being funded by an elderly tycoon named Weyland (Guy Pearce under a ton of latex), who hopes that the answers they find will enable him to live forever. Among the diverse crew members are Janek (Idris Elba), a pragmatic pilot, Drs. Shaw and Holloway (Noomi Rapace and Logan Marshall-Green), a couple of humanistic “true believers,” Meredith Vickers (Charlize Theron), the heartless corporate-type who is in charge and, most memorably of all, David (Michael Fassbender), a genius android who comes across like a live action version of 2001‘s Hal 9000. This is a remarkably strong cast (with the unfortunate exception of Marshall-Green, whose presence supplies a slice of hipster cheesecake in lieu of a performance). Fassbender, in particular, shines; he is spectacularly eerie and yet also strangely sympathetic as a non-human who always speaks in even, perfectly measured tones and whose laugh always sounds just a little too forced. The brilliant parallel that Scott draws between the Aryan features and chilly demeanors of David and Vickers is apparent long before Janek jokingly asks Vickers if she is a robot. Her response provides one of the movie’s few lighthearted moments.

Sparks begin to fly as the scientists, many of whom are at cross-purposes with one another, discover an alien tomb and begin arguing over if and how the mission should continue. There are plenty of surprises from this point forward, none of which I will give away. Let me just say that Prometheus is an unmitigated visual triumph that consistently offers one jaw-dropping shot after another and needs to be seen on a big screen to be fully appreciated. Scott, working with cinematographer Dariusz Wolski and production designer Arthur Max, seamlessly blends location footage from Iceland with brilliantly designed sets (the alien tomb’s dank, cavernous, honeycomb quality put me in the mind of Fritz Lang’s Indian tomb) as well as computer generated effects. This is not, I hasten to add, the flat, thinly textured, animated-looking CGI that Takashi Miike likes to slather over his films because he finds it funny but that the average Hollywood comic book movie wants you to accept at face value. These are dense, thickly textured digital images with impressive depth and a green-blue-black color scheme that makes them resemble lush, monochromatic oil paintings. The 3-D effects are also intelligently and judiciously applied; as some commenters have noted, Prometheus is in many ways a movie about movies, a quality that is perhaps most apparent in the way that the film’s most ostentatious stereoscopic effects also appear as stereoscopic effects to the characters (e.g., video images appear before them as three-dimensional holograms).

But Scott’s technical mastery would be nothing if Prometheus did not also hold viewers in thrall for every one of its 123 minutes. There are a number of magnificent, white-knuckle suspense set-pieces that rival anything that has come out of Hollywood in recent years (including a scene where two geologists confront a snake-like reptilian creature in the womb-like tomb and a truly horrifying body-horror sequence involving self-inflicted, robot-assisted surgery). Scott refreshingly plays these genre elements straight and true, which gives the film a winning balance of humility and grandeur. As a result, the more cosmic moments effortlessly conjure up a sense of wonder that something like the arty, overly-pious Tree of Life could never match. (Prometheus also proves that contemporary genre movies can be self-reflexive without being fashionably cynical a la The Cabin in the Woods.) Having said that, Prometheus is not perfect. In addition to the miscasting of Marshall-Green, the screenplay (by Jon Spaihts and Damon Lindelof) is perhaps overly stuffed with more characters and subplots than is strictly necessary, and the orchestral score also underlines the awe-inspiring moments a bit too emphatically for my taste. But these are minor quibbles considering the film provides so many images and ideas that do genuinely inspire awe in the tradition of the best science fiction movies – not only Alien and Blade Runner but Metropolis, The Thing From Another World, La Jetee, Alphaville, 2001: A Space Odyssey and Solaris as well. Even if Prometheus were only half as good as it is, however, I would still urge everyone I know to see it in the theater. It is, after all, a big-budget “tentpole” movie that is rated R and aimed at adults and God knows those are rapidly becoming an endangered species. 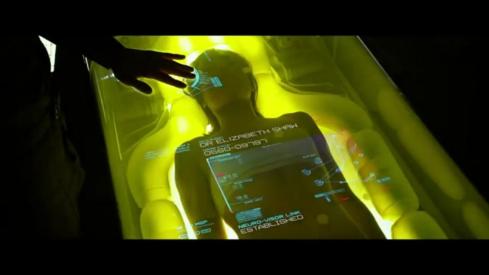 Filmmaker, author and Film Studies instructor. END_OF_DOCUMENT_TOKEN_TO_BE_REPLACED
This entry was posted on Monday, June 11th, 2012 at 6:31 am and tagged with Alien, Blade Runner, Prometheus, Ridley Scott and posted in Film Reviews. You can follow any responses to this entry through the RSS 2.0 feed.
« The Last Ten Movies I Saw
The Last Ten Movies I Saw »