This past Monday afternoon I went to the AMC River East theater in downtown Chicago to catch a matinee screening of A Simple Life, the latest film from veteran Hong Kong director Ann Hui. This low-key, naturalistic drama features Chinese superstar Andy Lau in an impressively de-glammed and un-showy turn as a movie producer who takes care of his elderly maid after she’s had a stroke. Hui, a terrific director of actors, has a long track record of taking charismatic actors known for flashy performances and guiding them into subtler and more nuanced territory. (See for instance the brilliant performances of Anthony Wong as a kindly priest in Ordinary Heroes or Jackie Cheung as a high school teacher going through a mid-life crisis in July Rhapsody.) But A Simple Life ultimately belongs to Deannie Yip who plays the maid, a performance for which she deservedly won the Best Actress award at the Venice Film Festival last fall. Unfortunately, I do not have time to write a proper review (I’m in the middle of finals for all seven classes I’m teaching and the other posts that will appear here in the next couple weeks have already been written in advance) but I can heartily recommend the film, especially to lovers of Chinese cinema; it is a movie about compassion made with compassion, qualities that are always refreshingly welcome. I would however like to note a few things about the movie’s incredibly odd theatrical distribution, which I think are emblematic of our times but which should also be oddly encouraging for cinephiles.

A Simple Life‘s distributor, an outfit named “China Lion,” booked the film at the River East, one of the Loop’s most popular multiplex theaters, without bothering to place print advertisements nor hold press screenings (call it the “anti-Avengers“). It appears they didn’t even have any movie posters created for the engagement. There certainly weren’t any on display inside or outside of the theater when I was there. The only advertising the film has received that I am aware of is through China Lion’s facebook page. Further, the film was projected digitally, probably from a blu-ray disc, which means the company was also spared the expense of striking prints. In other words, virtually no money was spent to distribute and promote A Simple Life in Chicago. This strikes me as an unprecedented instance of movie exhibition where the traditional duties of a “distributor” have essentially been eliminated from the process. China Lion’s thinking appears to be that they will simply book the movie in North American cities with “large Asian populations” and then rely solely on social media and word of mouth to draw in audiences. I myself would have never become aware of the release had it not been for Ben Sachs’ recent blog post about it at the website of the Chicago Reader. This entire phenomenon fascinates me because it could have only occurred in the 21st century, after the rise in popularity of both social media and digital projection. 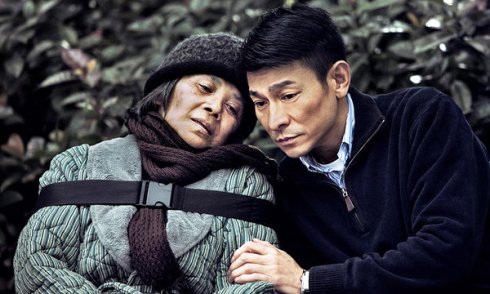 What I find most intriguing about the unusual distribution of A Simple Life in Chicago however isn’t so much the lack of traditional promotion but the fact that it’s playing at the River East (China Lion apparently has an exclusive deal with the AMC chain.) I feel this speaks to the by-now familiar notion that we are living in a world where “mass culture” is rapidly being replaced, for better or for worse, by countless niche markets. Instead of having to go to a “niche theater” to see a “niche movie” (as was always the case in the past), it now looks like the option of seeing a deeply obscure movie in a state-of-the-art multiplex may be the wave of the future. Several of my students at suburban colleges have informed me that it is common for new Bollywood and South Korean films to play suburban mutliplexes in areas where the immigrant populations from those countries is high. I’m assuming that film reviews and paid advertisements for those movies is likewise absent from the mainstream suburban press.

I hasten to add that if China Lion were to distribute certain movies in this under-the-radar fashion (like, say, Wong Kar-Wai’s highly anticipated The Grandmasters), I would feel outraged because I would know that those films deserve a higher-profile release. But A Simple Life is the kind of quiet, small movie that was never going to get picked up for U.S. distribution otherwise and therefore I’m exceedingly grateful to China Lion for allowing me the chance to see it on the big screen. By contrast, keep in mind that Johnnie To’s masterpiece Life Without Principle, a film ostensibly more accessible than A Simple Life, was picked up by a U.S. distributor last September who still have no plans to release it and will probably end up dumping it straight to DVD. The moral to all of this is that if you consider yourself an adventurous filmgoer (and if you’re reading this blog post then you probably are), it may no longer be enough to rely on reviews or advertisements if you want to know what good cinema fare might be playing at a theater near you. You may want to closely scan the titles of the films playing at your local theater and then be prepared to do a little research to figure out exactly what the hell they are. And, of course, you should keep reading this blog.

You can visit the English-language version of China Lion’s website here: www.chinalionentertainment.com

Filmmaker, author and Film Studies instructor. END_OF_DOCUMENT_TOKEN_TO_BE_REPLACED
This entry was posted on Wednesday, May 9th, 2012 at 9:03 am and tagged with A Simple Life, Ann Hui, China Lion and posted in Uncategorized. You can follow any responses to this entry through the RSS 2.0 feed.
« A Classic French Cinema Primer, pt. 1: Beyond the “Tradition of Quality”
The Last Ten Movies I Saw »

22 responses to “An Intriguing Trend in Contemporary Film Distribution”