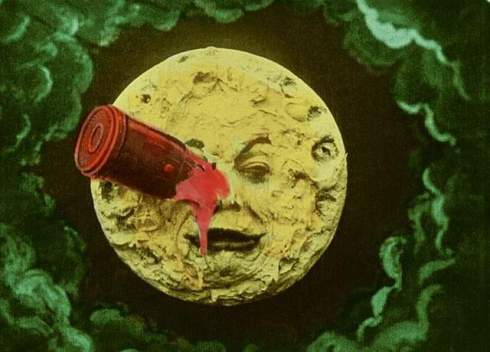 The exquisite fantasy films of French movie pioneer Georges Melies are currently experiencing a new and unprecedented wave of popularity due in large part to their place of prominence in Martin Scorsese’s Hugo. (In that film, Ben Kingsley gives a delightful supporting turn as the elderly Melies and Scorsese devotes a good chunk of the story to showing actual clips of the great director’s movies while also poignantly proselytizing about the importance of film preservation.) Fittingly, the enterprising U.S. label Flicker Alley, who specialize in distributing silent movies on home video, have just released a new Blu-ray (only their second ever such release) of Melies’ most famous film, A Trip to the Moon from 1902. Their release bundles together two painstakingly restored versions of the movie (one in black and white and one in its original hand-tinted color) along with The Extraordinary Voyage, a terrific new feature-length documentary on Melies’ life and work by the French directors Serge Bromberg and Eric Lange. Flicker Alley’s Blu-ray should be considered an essential addition to the home library of any serious film lover.

George Melies was a magician who became a filmmaker after he saw a demonstration of the Lumiere brothers’ Cinematographe (a combination camera, printer and projector) on December 28, 1895. But unlike the Lumiere brothers, Melies was not interested in making “actualities” about the real world. He wanted to make fictional narrative films in which he could create his own worlds. So, like Thomas Edison, Melies built a studio where his movies could be shot. Melies’ studio, meticulously recreated in Hugo, was ingeniously constructed of glass walls, like a greenhouse, so that his sets could be lit by natural sunlight. The films that Melies made in this studio, the first such movie studio in Europe, established him as the first real master of mise-en-scene (the way a director controls all of the elements within the frame). This is not to say that the Lumiere brothers were not wonderful filmmakers in their own right (I actually prefer their work to that of Melies), only that Melies was the first director to rigorously control the set design, costume design, lighting, staging of the action and the performances of his actors. Melies was also a pioneer in stop-motion photography and other special effects, wherein he essentially integrated the sleight of hand he had employed as a magician with cinematography. The resulting movies, including A Trip to the Moon, are the most sophisticated narratives of their time, blowing the primitive fiction shorts of Edison and others out of the water.

A Trip to the Moon borrows elements from science fiction novels by Jules Verne (De la Terre à la Lune) and H.G. Wells (First Men in the Moon) in telling the story of a group of French astronomers who make the first expedition to the moon. The film begins with a Scientific Congress debating whether or not to make the trip. Hilariously, one member who violently opposes the idea has papers and books thrown at his head by the chief astronomer who is played by Melies himself. Then we see the construction of the rocket ship, which is loaded into a giant canon by a chorus line of girls identically dressed in short shorts (remember: sex was used to sell movies 110 years ago too!) and fired directly at the moon. This leads to one of the most famous images of the early cinema and one that I am proud to have featured on a Christmas ornament in my home: the rocket ship piercing the man in the moon in the eye. Once on the moon, our intrepid explorers are captured by the extra-terrestrial moon-men known as the Selenites. These prototypical movie aliens are portrayed by members of an actrobatic troupe who delightfully tumble and somersault their way around the set. The Selenites take the captives to their king but the astronomers escape and, after a climactic battle, make their way back to the rocket ship. From there, the explorers return to earth where they receive a heroes’ welcome.

As anyone who has seen Hugo knows, A Trip to the Moon is a remarkably entertaining movie even, as the saying goes, by “today’s standards.” What makes the film so much fun are the many lovingly crafted details of its overall design. Georges Melies was fastidious in building his elaborate sets, all of which utilize scale models to create the illusion of deep focus. One rooftop “exterior” scene, for instance, features a brilliant forced-perspective backdrop where a cityscape in the distance is dotted with miniature chimneys that puff real smoke. The costumes and props are likewise a delight — from the medieval wizard-like look of the astronomers in the opening scene, all pointy hats and flowing robes, to the Selenites’ extraordinary appearance, which combines insect-like bodysuits with tribal-looking masks and spears. All of this makes Melies’ 14-minute fantasy an ideal silent film to introduce to children (and is also why the movie references in Hugo work as well as they do, instead of seeming like a mere commercial for Scorsese’s World Film Foundation, as some critics have claimed).

The restored, color version of A Trip to the Moon on Flicker Alley’s Blu-ray is breathtakingly beautiful. The original 1902 color-tinting actually enhances the movie by more clearly separating characters from their environment, increasing the illusion of depth and subtly directing viewers’ eyes to what Melies wants them to see within a given frame (the man in the moon getting hit by the rocket is the only close-up in the film). My only quibble with the Blu-ray is that each version of the film included in the set comes with a different soundtrack: the black and white version features a score by Robert Israel and the original narration written by Melies that was meant to be read aloud at screenings of the film, whereas the color version features a beautifully bizarre, euphoric new score by the French art-rock duo Air. Ideally, one should be able to choose either score for either version of the film. Needless to say, this is a minor quibble and I am ecstatic that Flicker Alley has put this package together. I watched it with passion.

Filmmaker, author and Film Studies instructor. END_OF_DOCUMENT_TOKEN_TO_BE_REPLACED
This entry was posted on Friday, April 13th, 2012 at 6:13 am and tagged with A Trip to the Moon, Georges Melies, Le Voyage dans la lune and posted in Blu-ray/DVD Reviews, Early Cinema, Film Reviews. You can follow any responses to this entry through the RSS 2.0 feed.
« The Last Ten Movies I Saw
The Last Ten Movies I Saw »