“At the height of his career, Murnau was able to mobilize all those forces which guaranteed him complete control of the film’s space. Every formal element – the faces and bodies of the actors, objects, landscapes, and such natural phenomena as snow, light, fire, and clouds – have been created or recreated with an exact knowledge of their visual effect. Never has a film left so little to chance.”

– Eric Rohmer, The Ogranization of Space in Murnau’s Faust, 1972 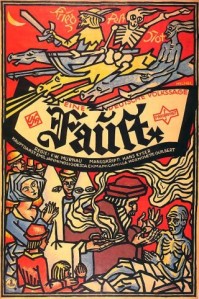 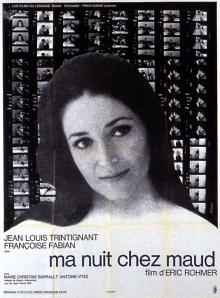 I recently screened F.W. Murnau’s Faust in a class for the first time and found myself enjoying it so much that I couldn’t believe I hadn’t shown it earlier. In the past 3+ years that I’ve been teaching film history, I’ve mostly alternated between screening The Cabinet of Dr. Caligari, Nosferatu and M in order to illustrate the German Expressionist movement. (I’ve shown Metropolis only once due to its length.) Watching Faust with a group of students for the first time has convinced me it’s not only one of the greatest of the Expressionist films but also the masterpiece of Murnau’s German period. As much as I love Nosferatu and The Last Laugh, Faust is more visually astonishing and elaborately conceived than either.

Anyway, it just so happened that I screened Faust shortly after having watched Eric Rohmer’s Six Moral Tales for the first time in many years. I was absolutely astonished to realize that the church scene in Faust (where Faust spies for the first time, and falls in love with, the “innocent girl” Gretchen) was the clear inspiration for the opening scene of My Night at Maud‘s. Then I remembered that Rohmer had written his doctoral dissertation on Murnau. The title of the dissertation is The Organization of Space in Murnau’s Faust and concerns Murnau’s extreme formal precision, a quality that the two otherwise dissimilar directors share. I love Rohmer’s claim, in the quote above, that no film has left as “little to chance” as Faust not only because Rohmer also left so little to chance as a filmmaker but also because chance is the explicit subject of My Night at Maud’s.

The more I think about it, the more tempted I am to call My Night at Maud’s a remake of Faust. Both films feature tormented men who fall in love with women in church before ever meeting them because the women seem to correspond to their ideals: innocent, blonde and virtuous. Both films tackle the subjects of moral choice, sin and the redemptive power of love. And although the opening of My Night at Maud‘s isn’t a shot-for-shot remake of the church scene in Faust, Rohmer is clearly going for a similar “feel.” Check it out:

Faust looking in on Gretchen at the beginning of the church scene in Faust:

Jean-Louis looking in on Francoise in My Night at Maud‘s: 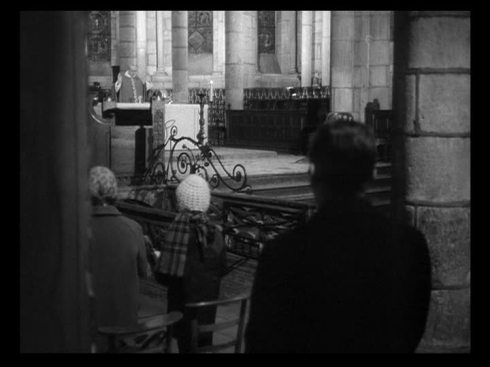 3/4 rear view of Gretchen, the blonde ideal in Faust:

Side view of Francoise, the blonde ideal in My Night at Maud‘s: 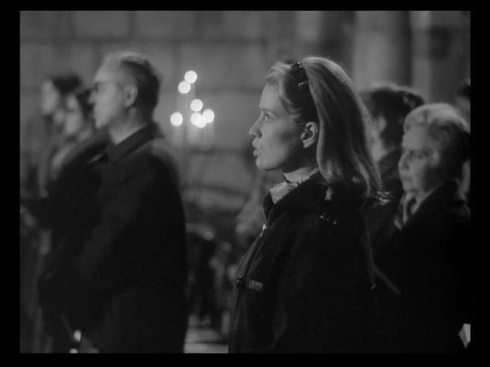 You can feel Murnau’s love for the pageantry of church service in this long shot (note also the similarity between the diagonal slashes of light in this scene and the wedding scene in Sunrise): 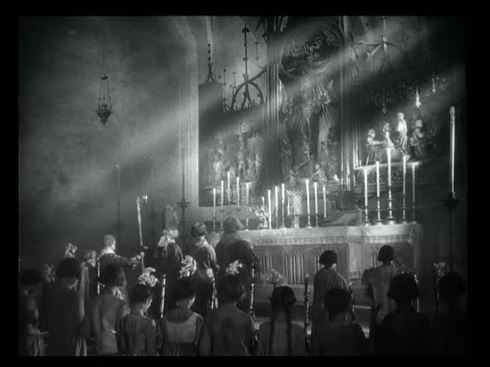 You can feel Rohmer’s love for the pageantry of Catholicism in this long shot: 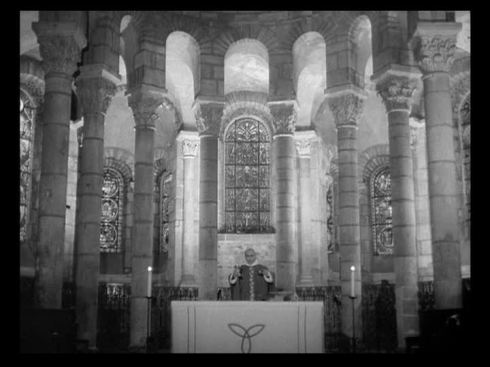 Finding secret correspondences like this between films made in different countries and different eras is one of the most gratifying aspects of cinephilia. I haven’t been this excited by such a discovery since I realized John Ford visually quoted a shot from The Last Laugh in Four Sons.

Filmmaker, author and Film Studies instructor. END_OF_DOCUMENT_TOKEN_TO_BE_REPLACED
This entry was posted on Friday, February 3rd, 2012 at 6:31 am and tagged with Eric Rohmer, F.W. Murnau, Faust, Ma nuit chez Maud, My Night at Maud's and posted in Film Reviews. You can follow any responses to this entry through the RSS 2.0 feed.
« He Said/She Said Review: The Innkeepers
The Last Ten Movies I Saw »