5 Comments | posted in The Last Ten Movies I Saw

In honor of Halloween, today’s post concerns two of my favorite horror movies – the Universal Studios productions of The Old Dark House (James Whale, 1932) and The Black Cat (Edgar Ulmer, 1934). 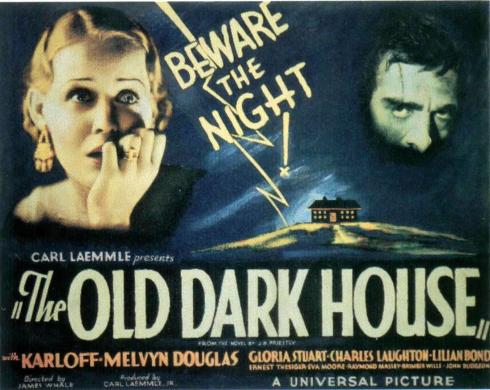 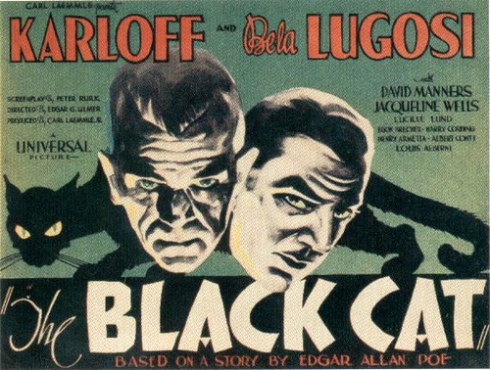 The Old Dark House and The Black Cat came out just two years apart during the first beloved cycle of horror films produced by Universal in the early sound era, yet neither are as well known today as the studio’s more famous monster movies of the same period (Dracula, Frankenstein, The Mummy, The Invisible Man, etc.). Instead, The Old Dark House and The Black Cat, which exemplify the “haunted house” subgenre, have attained the status of cult classics while also remaining supremely recognizable works of “star directors” James Whale and Edgar Ulmer. They also both masterfully combine horror and humor, serve as great showcases for the versatility of actor Boris Karloff and clock in at barely more than an hour in length a piece. I therefore can’t imagine a more ideal Halloween double feature than watching these two chillers back to back.

The Old Dark House begins with one of the most charming pre-credits title cards in the history of cinema, one that perfectly captures the film’s spirit of mischievous fun. It is worth quoting in its entirety: “Karloff, the mad butler in this production, is the same Karloff who created the part of the mechanical monster in Frankenstein. We explain this to settle all disputes in advance, even though such disputes are a tribute to his great versatility.” (Gee, kind of makes you wonder how many people left screenings of The Old Dark House on its initial run grateful for this information, lest they might have otherwise lost a tidy sum by making a wager on whether or not Karloff appeared in the movie!)

Karloff’s role is much smaller here than his impressive star turn in the previous year’s Frankenstein, which was also directed by Whale. In The Old Dark House, Karloff again plays the baddie but this time out he is just one of a family of freaks – their butler to be precise – who occupy a gloomy Welsh mansion and spend a night menacing two groups of travelers (including such prominent future stars as Melvyn Douglas, Gloria Stuart, Raymond Massey and Charles Laughton) who are forced to seek refuge there during a thunderstorm. Karloff’s character, Morgan, is a drunken scar-faced mute who spends most of the film chasing Stuart, looking fabulous in a tight-fitting gown, around the mansion. The other family members, who make the family of The Texas Chainsaw Massacre look like sitcom characters, consist of: an eccentric middle-aged deaf woman who badgers Stuart about her alleged promiscuity, a feminine man who is afraid of going upstairs, a crazed pyromaniac locked in an attic, and a one hundred and two year old man with a long white beard (played by a woman!) who is kept locked up in another room. The way these characters run around and bounce off each other like billiard balls produces enough scares (and laughs) to fill two movies.

But the film’s real appeal (and what makes it a kissing cousin of Whale’s other masterpiece The Bride of Frankenstein) is its genuinely unsettling use of wicked humor. This is perfectly illustrated by the scene early on where Eva Moore, the deaf woman, shows Stuart to her room and, even though they’ve only just met, launches into a bizarre monologue about sex and death. Stuart (best known for playing the old Rose in Titanic but young and dishy here) looks on uncomprehendingly while Moore compares her to her sister, a “wicked one” who died at the age of twenty one. We see a series of close-ups of Moore’s face reflected in a distorting mirror as she maniacally says that the house used to be filled with “laughter and sin, laughter and sin.” As Stuart slips out of her wet clothes, Moore offers the observation that Stuart thinks of nothing but her long straight legs, white skin and how to please a man. The scene reaches a delirious climax as Moore grabs hold of Stuart’s negligee and exclaims, “That’s fine stuff but it’ll rot.” She then points to Stuart’s chest and adds, “That’s finer stuff still but it’ll rot too . . . in time!” 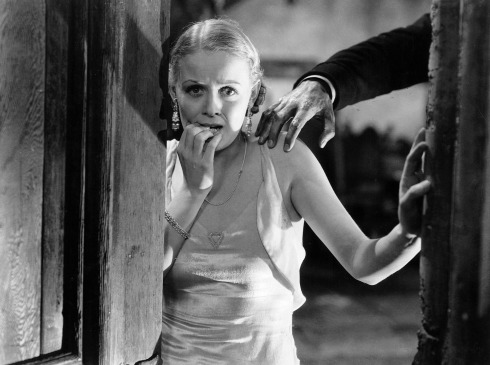 Even better (and quirkier) than The Old Dark House is Universal’s The Black Cat from two years later, a film noteworthy for being the only A-list project ever helmed by B-movie king Edgar G. Ulmer. (Ulmer would shortly thereafter be blacklisted for having an affair with the wife of a well-connected producer and never again worked for a major studio.) The Black Cat is credited as an adaptation of the Edgar Allen Poe story with the same name although the two in fact have nothing in common. It is more notable as the first and best pairing of co-leads Karloff and Bela Lugosi (who would have seven more go-rounds together after this one). Since both were fresh off of career-defining performances (Frankenstein for Karloff and Dracula for Lugosi), pitting them against each other was a big deal, kind of like one of those comic book crossovers where Superman squares off against Spiderman or what have you.

Like The Old Dark House, The Black Cat is also set in Europe (Hungary this time) and also follows the misadventures of travelers (a honeymooning American couple) forced to seek refuge in a gothic mansion inhabited by a madman. Once there, the innocent couple (David Manners and Julie Bishop) become unwitting pawns in a life-or-death chess game between Hjalmar Poelzig (Karloff), the architect/war criminal who owns the mansion, and his adversary Dr. Vitus Werdegast (Lugosi), who is seeking revenge on Poelzig for the murder of his wife some years earlier. But the film unfolds less like a linear narrative and more like a troubling dream as scenes involving Satanic rituals, beautiful female corpses showcased in glass coffins, Werdegast’s irrational fear of cats and a literal chess game between Poelzig and Werdegast all demand to be put together like pieces of a jigsaw puzzle. Binding these disparate narrative elements is Ulmer’s suitably dark and moody Germanic sensibility, which is reflected in the film’s Expressionist lighting, the Bauhaus architecture of the set design and a superb classical music score that prominently features Beethoven’s Symphony No. 7.

The best piece of critical writing on The Black Cat that I’ve come across belongs to filmmaker and theoretician Raul Ruiz (RIP!), who only got around to watching the movie after having heard himself compared to Ulmer by Jonathan Rosenbaum and other critics. In a brain-twisting and witty essay in the indispensable collection Projections 4 1/2, Ruiz writes:

“(The Black Cat) presents itself as a series of situations, each of which has an independent existence of its own: a game of chess, Bela Lugosi’s cat phobia, allusions to an allegorical battle (Europe as a field of corpses), Bauhaus design. All these elements are stories that the film could do without, and which in the end stifle and obscure the central story. A bad critic would call these extraneous fragments ‘decorative’. Instead of helping to gradually reveal that narrative, as in a film which tells one single story, each of these stories dies outside the area of fiction that surrounds the narrative.”

In a cheeky post-script, Ruiz notes that after watching the film, “. . . as in a melodrama, I exclaimed ‘Father!’ and (Ulmer) replied ‘My son!'” Writing as someone who counts many living and dead movie directors as “extended family” (including Whale, Ulmer and Ruiz), I know exactly what he means. 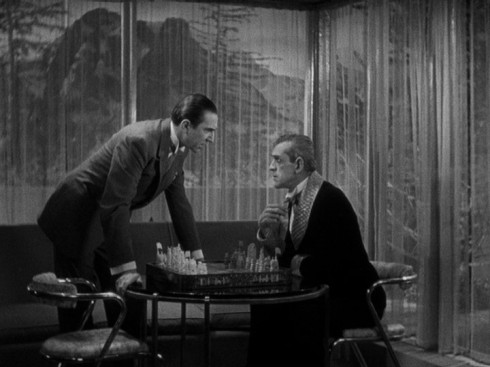 The Old Dark House and The Black Cat are available separately in serviceable standard-def DVD editions (the former via Kino, the latter via Universal). Along with many other things that I fantasize about large corporations doing that will probably never come to pass due to rights issues, I would love to see them both put together on a single Blu-ray disc (preferably with Criterion-like remastered sound and picture quality, thank you very much.)