A continuation of my list of essential Hong Kong movies. This part of the list includes titles released between 1986 and the present. 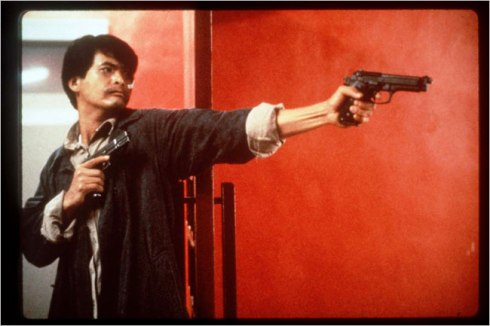 With this 1986 action movie extravaganza, John Woo almost single-handedly kicked off the “heroic bloodshed” genre, where the conventions of the period swordplay film are transposed to the mean street of contemporary Hong Kong. This tale of two brothers on opposite sides of the law (one a cop, the other a counterfeiter) has all of Woo’s soon-to-be trademarks: outrageously choreographed shootouts, mawkish melodrama, references to Martin Scorsese and Jean-Pierre Melville, and the charismatic Chow Yun-Fat at his most iconic – sporting sunglasses and a trench coat and with a .45 in each hand. Boo-yah!

Or Another Side of Chow Yun-Fat. While Chow will likely always be most closely identified with John Woo shoot-em-ups, I think his best performance is in this beautiful romantic drama by the relatively unheralded female director Mabel Cheung. An Autumn’s Tale was shot entirely in New York City and charts the exceedingly poignant love story between Jennifer (Cherie Chung), a Hong Kong native who moves to the States to join her no-good, cheating boyfriend at NYU, and her cousin Figgy (Chow), a gambler and wastrel who nonetheless proves to have a heart of gold. The two leads are superb and the deft use of New York locations makes this sweet and touching film a priceless time capsule.

Producer Tsui Hark (often referred to as “the Steven Spielberg of Hong Kong” for his proclivity for big budget fantasy) teamed up with action choregrapher Ching Siu-Tung for this awesome remake of the Shaw Brothers’ 1960 ghost story classic The Enchanting Shadow. Leslie Cheung plays Ling, a traveling tax collector who seeks refuge for the night in a haunted temple where he falls in love with a beautiful young woman (Joey Wang) who turns out to be a ghost! Scary, funny (Cheung is hilarious as the bumbling Ling), thrilling, romantic and with delightful special effects (I’m especially fond of the tree spirit with the killer tongue).

As producer/writer/director Tsui Hark inaugurated a new wuxia boom in the late ’80s and early ’90s with titles like Swordsman I and II, Dragon Inn and the Once Upon a Time in China films starring Jet Li as real life doctor/martial arts hero Wong Fei-Hung. Set in the late 19th century, the first and best of the series pits Wong against the forces of British and American colonialism as well as local Chinese gangs and throws in a taboo romance between Wong and his Aunt Yee (the lovely Rosamund Kwan) for good measure. A serious, intelligent kung fu film with fight scenes as exciting and cinematic as the best dance sequences from the golden age of the Hollywood musical.

Prior to the rise of Wong Kar-Wai, Stanley Kwan was Hong Kong’s most prominent art film director. Often distributed under the English title Centre Stage (an ill fit since that connotes theatrical performance), Actress is Kwan’s masterpiece and one of the all-time great Hong Kong films – a biopic of silent Chinese film star Ruan Ling-Yu (Maggie Cheung in her first great performance) who committed suicide at the age of 24. Shuttling back and forth in time, set against a backdrop of political tumult and audaciously including clips from Ruan’s classic films as well as documentary segments featuring director Stanley Kwan and the cast of Actress, this is essential viewing for anyone who cares about cinema.

In many ways the ultimate Hong Kong film – a Romeo and Juliet style love story liberally dosed with fantasy, comedy, over-the-top action and colorful, expressionist sets. Brigitte Lin (a Garbo-esque icon of mystery and beauty) plays Lian Ni-Chang, a girl raised by wolves(!) who works as an assassin for an evil cult. She falls in love with Zhuo Yi-Hang (Leslie Cheung), a Wu Tang Clan commander and the chief rival of her bosses. The conflict both characters face, between professional duty and the desires of the heart, is almost inexplicably moving given the film’s outrageous, absurdist tone. But that kind of off-the-wall genre-busting is what Hong Kong cinema is all about.

Jeffrey Lau, Wong Kar-Wai’s more commercially-minded cousin, directed this ambitious and masterful two-part adaptation of the classic Chinese novel Journey to the West. Part one is subtitled Pandora’s Box, part two is subtitled Cinderella; both must be seen in sequence to be understood. The convoluted but consistently entertaining plot tells the epic story of how Buddhism came to China courtesy of Joker, a bandit who discovers that he is the reincarnation of the “Monkey King.” Lau’s masterstroke was casting Stephen Chow, one of the most popular Hong Kong actors (and filmmakers) of the late ’90s and early ’00s, in a relatively early performance that is arguably his finest. It is no exaggeration to say that Chow recalls no one here so much as golden age Charlie Chaplin in his flawless blend of comedy and pathos.

One of the definitive films of the ’90s, Wong Kar-Wai’s refreshingly original spin on the romantic comedy tells two parallel but unrelated stories involving heartbroken cops (Takeshi Kaneshiro and Tony Leung) who attempt to get over recent break-ups by becoming involved with strange new women – a counter girl at a fast food restaurant (Faye Wong in her first screen performance) and an international drug smuggler (Brigitte Lin in her last). Wong’s innovative visual style, predicated on handheld cinematography and optical effects that turn nocturnal Hong Kong into an impressionistic blur of colorful neon, ideally compliment the film’s alternately sweet, funny and melancholy tone. The cinematic equivalent of a perfect pop song.

I’m fond of calling Johnnie To the world’s greatest genre director and this film, the coolest gangster movie since the heyday of Jean-Pierre Melville, is the best place to start exploring his work. After an attempt is made on his life, a triad boss hires five professional killers (a who’s who of Hong Kong’s best male actors of the ’90s) to serve as his personal bodyguards while trying to unravel the mystery of who ordered the hit. Plot however takes a serious back seat to character development as scene after scene depicts our quintet of heroes bonding and playing practical jokes on each other. (A personal highlight is the brilliant sequence where the five co-leads engage in an impromptu paper ball soccer match.) When the action does come, it arrives in minimalist, tableaux-like images of meticulously posed characters whose staccato gunfire disrupts the silence, stillness and monochromatic color scheme on which the entire film is based. 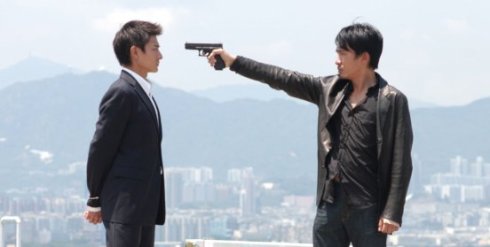 Directors Andrew Lau and Alan Mak reinvigorated the cop thriller with this inventive and complex doppelganger story about an undercover police officer (Tony Leung) who infiltrates a gang and his opposite number, a gangster (Andy Lau) who becomes a “mole” in the police force. In addition to the swiftly paced storytelling, beautiful cinematography (Wong Kar-Wai’s longtime DP Chris Doyle is credited as consultant) and Leung’s impressively tortured performance, what really impresses here is the extent to which the film eschews physical violence in favor of old-fashioned suspense based on cat-and-mouse style chase scenes. Deepened by references to Buddhism (the film’s original title translates as “Continuous Hell”), this is far superior to the Hollywood remake (Martin Scorsese’s The Departed).