The Magic of Mizo

The great Japanese director Kenji Mizoguchi was born on this day in 1898. His masterpiece Ugetsu is my favorite movie to show in Intro to Film classes to exemplify Japan’s astonishingly rich post-World War II period. It shares a rotating slot with Ozu’s Tokyo Story, Kurosawa’s Seven Samurai and Mizoguchi’s own Sansho the Bailiff. 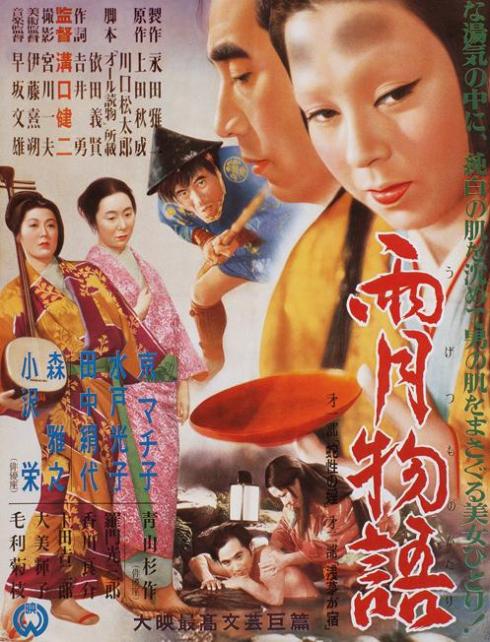 Akira Kurosawa is the most famous Japanese — nay Asian — director of all time. This is in part because his Rashomon won the top prize at the Venice International Film Festival in 1951 (then as now one of the top three most prestigious film festivals in the world), thus opening up the floodgates for international companies to acquire then-exotic Japanese movies and distribute them widely in the West for the very first time. Abetting Kurosawa’s fame was the fact that he made his movies, especially his samurai films, in a style that was arguably already familiar to Western audiences. Seven Samurai and Yojimbo, for instance, would be unthinkable without the classic Hollywood westerns of the ’40s and ’50s. Of course, these chambara classics in turn ended up being massively influential on American and European westerns in the 1960s. And that kind of give-and-take is how the language of cinema evolves.

Ironically (or not depending on how you look at it), Kurosawa was a relative newbie when he made his international breakthrough; he had only started directing during the second World War. The other high-profile Japanese directors of the country’s post-war boom years (Yasujiro Ozu, Kenji Mizoguchi, Keinosuke Tinugasa, etc.) had been around since the silent era. Of these elder statesmen, all of whose films were to a greater or lesser extent “more Japanese” than Kurosawa’s, Mizoguchi enjoyed the greatest international success. From 1952 through 1954, he won an unprecedented three Best Director prizes in three consecutive years at the Venice International Film Festival for his late period masterpieces The Life of Oharu, Ugetsu and Sansho the Bailiff. Of these, my favorite is Ugetsu, a unique war movie/melodrama/ghost story hybrid.

Although many of Mizoguchi’s most celebrated films fall into the same “jidai-geki” (or period drama) genre as those of Kurosawa, the approaches of the two directors could not be more different. Where Kurosawa’s period movies tended to be swiftly paced, action-oriented samurai pictures focusing almost exclusively on male characters, Mizoguchi’s are closer to melodrama, with a particular focus on the suffering of women throughout Japan’s tumultuous political history. The other chief difference between the two is in their approach to visual style. Where Kurosawa favors pan shots with a telephoto lens and brisk cutting (including a unique signature use of “wipe” transitions), Mizoguchi’s films unfold at a slower pace but with no less of a flamboyant approach to the image; the cutting is certainly slower in Mizoguchi but the camera is almost constantly moving. In Ugetsu approximately 70% of the shots are crane shots, the most logistically difficult type of camera movement to execute but one that allows the camera to move seemingly anywhere. “The pictures should roll out like scrolls,” Mizoguchi informed cinematographer Kazuo Miyagawa before shooting began.

The title Ugetsu (or Ugetsu Monogatari as it is known in Japan) literally translates as “Tales of Moonlight and Rain,” an appropriately poetic title for this most poetic of movies. The film draws on three short stories, Akinari Ueda’s “The House in the Thicket” and “A Serpent’s Lust” and Guy de Maupassant’s “How He Got the Legion of Honor,” to tell the story of the sentimental education of two peasants who attempt to become war profiteers in late 16th century Japan: Genjuro (Masayuki Mori) is a potter who plans on selling his wares to soldiers in a civil war-torn domain. His neighbor, Tobei (Eitarô Ozawa), accompanies him to assist in transporting and selling the pottery but has the underlying motive of becoming a great samurai warrior. Both men abandon their wives but with the intention of returning home someday covered in wealth and fame. As is typical of Mizoguchi, the plight of the abandoned women, one of whom is murdered by starving soldiers and one of whom is forced into prostitution, is just as important as that of their male counterparts.

Ugetsu is a film known for its extraordinary “set pieces,” individual sequences that, in their lyricism and beauty, rank with the most evocative and richly detailed passages in all of cinema. One such episode is the famous “phantom boat” sequence, where all four protagonists travel from their hometown of Nakanogo across Lake Biwa by boat to reach the marketplace in Nagahama. (Since Tobei’s wife Ohama is the daughter of a boatman, she is the one who pilots the boat across the lake.) The ghostly atmosphere of this scene, which involved seamlessly blending shooting on location with shooting in a giant water tank inside of Daiei Studios, is achieved through Mizoguchi’s magical mise-en-scene; the low-key lighting, dense fog and elaborate tracking shots combine to create flowing, painterly images that are spellbinding in their intensity. Greatly adding to this hypnotic quality is a spare soundtrack, on which we hear the singing of Ohama (Mitsuko Mito) accompanied by the sound of a simple, non-diegetic metronomic drumbeat. In the middle of the lake, another boat emerges from the fog. It contains a lone passenger, whom our protagonists initially mistake for a ghost. The man reassures them in a whisper that he is not an apparition but a dying man whose boat was overtaken by pirates who inflicted his mortal wounds. He warns them to return home and then promptly dies. Genjuro and Tobei say prayers for the man as they push the boat away and continue on their journey. The steady drumbeat continues. The men will soon abandon their wives. Mizoguchi has foreshadowed the true supernatural occurrences that will be forthcoming in Ugetsu.

In Nagahama, Genjuro and Tobei split up. They both ironically achieve their dreams: Tobei attains the status of a great warrior almost by accident and Genjuro’s pottery business becomes phenomenally successful through the patronage of a single client — the aristocratic but mysterious Lady Wakasa. This latter plot thread leads to my favorite scene: after she convinces him to deliver his wares to her mansion in person, Lady Wakasa seduces Genjuro and persuades him to marry her (in spite of the fact that he is already married). Initially drunk on his good fortune (as well as what one presumes is incredible sex), Genjuro’s elation soon turns to skepticism and eventually fear as he realizes his new bride is actually a ghost. Late one evening, Lady Wakasa asks Genjuro to return with her to her “native land.” He refuses, telling her of his other wife and child and his desire to return to his true home. Lady Wakasa attempts to touch Genjuro but recoils in horror; a Buddhist priest who knew of the Lady’s true identity has painted protective prayers all over Genjuro’s body. She tells him to wash off the offending characters but Genjuro draws his sword, swinging it wildly about as he exits the manor for good.

What is remarkable about this sequence isn’t what happens on a narrative level but rather the spooky mood that Mizoguchi is able to so effectively conjure through his total mastery of film form. The interior of Lady Wakasa’s manor is lit by pronounced chiaroscuro (the conscious interplay of light and shadow), which becomes increasingly dark as Genjuro slices the illuminating candles with his sword. The lighting here resembles nothing so much as the deliberate artifice of the German Expressionist films of the 1920s. And, as in a film by Murnau, the crane-mounted camera constantly follows the movement of the characters throughout the scene, not only laterally but vertically as well. Finally, all of this action unfolds to the accompaniment of a creepy, dissonant musical score (credited to three composers: Fumio Hayasaka, Tamekichi Mochizuki and Ichirô Saitô), featuring eclectic arrangements involving instruments both Japanese and Western (dig that wailing saxophone!).

But none of these individual set pieces would matter if the whole was not greater than the sum of its parts. Indeed, Mizoguchi manages to string these scenes together like pearls on a necklace as the underlying themes (greed, the folly of ambition, the suffering of civilians during wartime) coalesce in the film’s sublime resolution; Tobei the newly-anointed samurai meets his wife Ohama as a newly-indoctrinated prostitute in a brothel. Both characters, overwhelmed by a complex combination of relief, shame, happiness and grief, return home and vow to start over. Genjuro likewise returns home to find his wife and child gone. In a legendary shot, Mizoguchi’s camera circumscribes a 360-degree pan around the tiny hut, beginning with an empty room but ending on Genjuro’s wife Miyagi (Kinuyo Tanaka) where no character had stood before. Delighted to be reunited with his family, Genjuro falls asleep with his infant son in his arms. The next morning however, Genjuro awakes to the realization that, while his son is safe and sound, his wife died some time ago and the Miyagi he saw only hours earlier is now too a ghost. Like the wedding guest in Coleridge’s “The Rime of the Ancient Mariner,” Tobei and Genjuro are now sadder but wiser men. 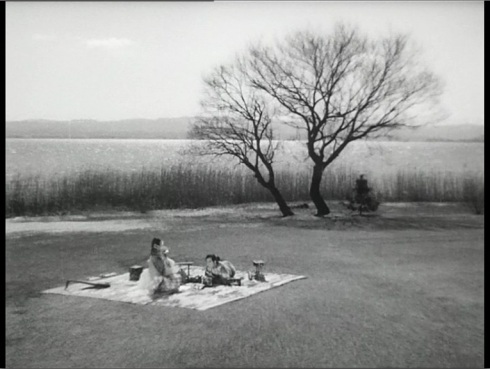 Ugetsu is available from the Criterion Collection in an excellent standard DVD edition. But a film with cinematography of this magnitude deserves a Blu-ray upgrade.

Filmmaker, author and Film Studies instructor. END_OF_DOCUMENT_TOKEN_TO_BE_REPLACED
This entry was posted on Monday, May 16th, 2011 at 8:04 am and tagged with Akira Kurosawa, Kenji Mizoguchi, Ugetsu, Ugetsu Monogatari and posted in Essays, Film Reviews. You can follow any responses to this entry through the RSS 2.0 feed.
« The Last Ten Movies I Saw
From the Minx Archives: Jeremy Quinn Essay »

30 responses to “The Magic of Mizo”