Pierre Kattar is a Washington D.C.-based video journalist and documentary filmmaker. (Since meeting him in the green pastures of DePaul University in the fall of 1993, he has also become one of my oldest and dearest friends.) After graduating from DePaul, Pierre worked a lengthy stint at washingtonpost.com where he received numerous honors including an Emmy award and a White House News Photographers Association Video Editor of the Year award. More recently, Pierre has branched out to work as a freelance journalist and independent filmmaker. One of his latest projects, made in collaboration with Jill Drew, is The Buzz and Beyond, a 10 minute short that tracks three prominent journalists (NPR’s Don Gonyea, Mark Leibovich of The New York Times and Alexander Burns of Politico) as they cover last year’s midterm elections. I recently spoke with Pierre about this and other projects.

MGS: On your website you refer to yourself as both a “video journalist” and a “filmmaker.” How would you define those roles and what do you see as the main differences between the two?

PK: I define a video journalist as someone who reports, writes, shoots, edits and produces a news story for publication on a news website or broadcast on TV. I use the term filmmaker because the stories I tend to produce aren’t the hard news kind. They lend themselves to an approach one finds in documentary films. I’m inspired by the cinema verite approach and Errol Morris’s work. When I can, I try communicating not only the facts but also the sense of place, the mood of a story.

MGS: I was really fascinated by The Buzz and Beyond for the behind-the-scenes look it gives at print, radio and television journalism. When you start out making a video like this do you have a clear idea of what the outcome will be in terms of style, content or length – or is it all pretty much left to chance?

PK: The idea for The Buzz and Beyond came from Jill Drew, a former Washington Post reporter and editor and recent advocate for video journalism. We talked at length about the style, content and length. In the end, we were most able to control the style.

Jill wanted the piece shot in the cinéma verité style. She found the characters and I shadowed them as they went about their day reporting the midterm elections. True to cinema verite, nothing was staged or repeated for the camera. I never asked the subjects to do a certain thing or answer any questions while they worked. We diverged from strict verite when Jill interviewed the subjects. We tried to minimize the narration as well but realized that the piece needed context. We knew we would have to interview the subjects beforehand and probably narrate given the short amount of time we spent with the subjects. So stylistically speaking the execution lived up to the vision.

The content on the other hand was harder to predict. For the visuals, it was important for us to get both Leibovich and Gonyea reporting on the road. Leibovich agreed to be part of the story just twelve hours before he left Washington, D.C. for Little Rock, Arkansas to catch the Senator Blanche Lincoln campaigning at the Arkansas state fair. We knew that, regardless of what happened, we wanted to be there for that scene. I rushed to get tickets, pack and make it to Little Rock on time. With Gonyea, we wanted to capture him recording his radio story. The problem was that his deadline got pushed back and my flight was scheduled to leave before the deadline. Jill and I decided to delay my flight (twice) so we could capture the scene. With Burns, the scene we wanted to capture was of him writing the must-read early-morning bulletin he composes every day in the wee hours of the morning. He was a bit reluctant at first to let us into his apartment at 4 am but with some persistence, we were able to get in and capture the scene. The audio story or verbal content was where chance played a greater role. We talked about all the topics we wanted to touch on with each interview but it’s impossible to predict what someone’s going to say. The run time was a bit longer than what we planned but at nine and a half minutes long, it’s certainly within reason.

The final product is different than what we expected it at the outset to be. Nonetheless, we love it for what it is.

MGS: What, if anything, do you feel you learned by watching Gonyea, Leibovich and Burns that might help you in your own journalistic endeavors?

PK: Three words come to mind when I think about what I learned: persistence, flexibility and dedication. Stories change all the time and you have to be flexible in order to change direction or focus. Persistence helps find the story when your imagined story doesn’t flower. All three subjects were dedicated to their craft. Gonyea persisted in getting the audio because he knew his radio piece would be that much better, Leibovich wrote and wrote and wrote. He wrote in his hotel room, at Starbucks, on the moving walkway at the airport, on his blackberry while in flight. And Burns wakes up at 4 am to be first. You have to love doing the work of journalism to do it well.

MGS: Leibovich says that when covering politicians he’s trying to find “the gap between what is true and what they are trying to present as true.” How does a journalist go about finding this gap?

MGS: You just went to Africa to work on a project for NewsHour with Jim Lehrer. What can you tell me about the project and what was the experience like?

PK: The NewsHour hired me to shoot for them in Sudan and Ethiopia. I worked with a producer and a correspondent on three stories. The first two focused on the referendum in south Sudan and the third explored the problem of fistula among rural women in Ethiopia. Working in both countries was challenging but rewarding. Just getting there and getting credentialed took days. We arrived in Juba, south Sudan’s capital, to get credentialed and then traveled by charter flight to Bentiu, a town in Unity state, close to the border with north Sudan. There was no plumbing. I surprised myself and ended up loving taking bucket showers in the morning and shaving outside with bottled water. Power was available during the day between noon and midnight so charging batteries was a hassle without the chance to charge overnight.

I stayed on in Ethiopia after the PBS folks left. I got a commission from VJ Movement, an online news video site, to do a piece on journalist Dawit Kebde who runs an independent newspaper in Ethiopia – not a small feat in a country that likes to control its message. In fact, the Ethiopian courts sent him to jail for nearly two years. He was charged and convicted of treason, attempting to subvert the constitution and genocide. This was in 2005 when protests erupted throughout the country when election results, considered fraudulent by international observers, were announced in May. Opposition party members and thousands of protesters demonstrated in the streets of Addis. The police beat and shot at student protesters killing 200. Kebede says his only crime was writing an editorial asking why the police killed those students. After his life sentence was commuted to 21 months (he had to sign a presidential pardon admitting guilt to the charges), he started another paper. He’s fearless.

MGS: Assuming money, resources and access were not a problem, what would be your dream project as a documentarian?

PK: I have lots! But I would immediately start documenting President Obama. In homage to Robert Drew’s Crisis: Behind a Presidential Commitment, I would like to document the President as he and his administration grapple with a crisis. Imagine Woodward’s words turned to moving pictures.

MGS: Your work has been honored by the last two Presidential Administrations. What I’d like to know, Pierre, is who has the firmer handshake: Bush or Obama? 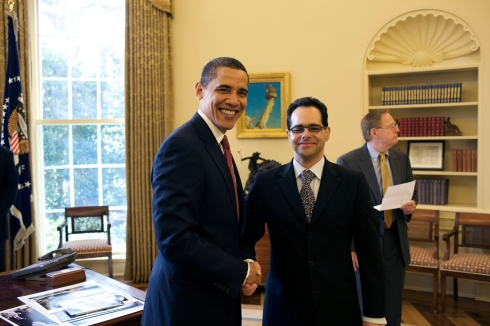 You can view The Buzz and Beyond at the Columbia Journalism Review.

You can learn more about Pierre on his official website.

Filmmaker, author and Film Studies instructor. END_OF_DOCUMENT_TOKEN_TO_BE_REPLACED
This entry was posted on Tuesday, March 29th, 2011 at 8:24 am and tagged with Jill Drew, Pierre Kattar, The Buzz and Beyond and posted in Interviews. You can follow any responses to this entry through the RSS 2.0 feed.
« The Last Ten Movies I Saw
The Last Ten Movies I Saw »