Deserve’s Got Nothing to Do With It 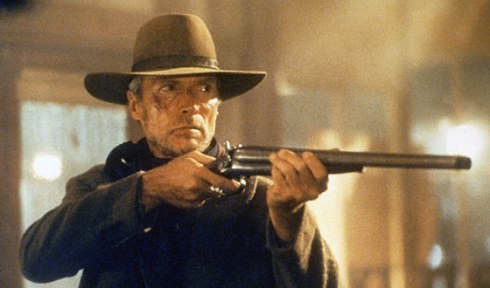 This Sunday night I will, as is my custom, watch the Academy Awards ceremony live on television. This is a ritual that some of my more serious-minded cinephile friends don’t understand. The Oscars, I tell them, are a night of good trashy fun, which is more than what I feel most Hollywood movies these days are capable of providing. And the Oscars do have a long and colorful history, stretching all the way back to 1927, which makes them more meaningful and interesting than any other awards show. The winners, of course, are chosen more for political reasons than anything else; for instance, if Annette Bening wins Best Actress for The Kids Are All Right, as some pundits are predicting, it will be less for her fine performance (the best thing about that overrated film) than because she’s been nominated several times before and hasn’t yet won. As Clint Eastwood said in the multiple Oscar-winning Unforgiven, “Deserve’s got nothing to do with it.”

But while I don’t believe the Oscars represent any legitimate measure of artistic validation for the winners (have you seen Cimarron lately? Or for that matter Dances with Wolves?), there have been rare occasions when the Best Picture winners truly were the best American films released during a given calendar year. It has become common for movie buffs to make lists of “alternative Oscars” – titles frequently trotted out include such perennial hindsight favorites as Sunrise (1927), City Lights (1931), Citizen Kane (1941), Singin’ in the Rain (1952), The Searchers (1956), Vertigo (1958), 2001: A Space Odyssey (1968) and Goodfellas (1990). It is less common to hear discussion about how Oscar sometimes gets it right. So below is a list of what I consider the top ten best Best Picture winners. In other words, these are films that I believe really did deserve the honor:

He may have wound down his career by indifferently presiding over Rat Pack vehicles but Lewis Milestone also made two of the best American movies of the early sound era – the Al Jolson-starring musical Hallelujah, I’m a Bum and this powerful anti-war film based on the celebrated novel by Erich Maria Remarque. The battle scenes are astonishing, even by today’s standards, and the movie’s final symbolic image (a soldier cut down by sniper fire while reaching out to touch a butterfly) captures the futility of war better than most entire war films.

Billy Wilder’s last great movie is this acerbic comedy about a lowly office worker who unexpectedly finds himself climbing the corporate ladder after letting his superiors use his apartment to conduct their extramarital affairs. The witty screenplay, courtesy of Wilder and I.A.L. Diamond, is chockfull of memorable lines, which are delivered by a pitch-perfect cast including Jack Lemmon, Shirley MacLaine and Fred MacMurray. “Shut up and deal.”

Francis Ford Coppola’s epic gangster saga is the rarest of feats, a great work of art that is also a cultural phenomenon. Transcending the pulp novel on which it’s based (and which Coppola was initially ashamed to adapt), every aspect of this movie is the stuff of legend: iconic performances by a heavyweight cast of Method actors, hauntingly beautiful Nina Rota score, cinematographer Gordon Willis’ innovative use of “Rembrandt lighting,” and a plot that achieves the proportions of a Shakespearean tragedy. A lot of people prefer the sequel but not me.

Some of the greatest tunes from the Gershwin songbook are strung together to form the backbone of this original MGM movie musical, one of the high water marks of the entire genre; Gene Kelly is the titular character, an American expatriate painter caught between the wealthy, older benefactress who loves him and the young ingenue with whom he is smitten. Vincente Minnelli’s direction is a model of colorful, expressive, intelligent mise-en-scene, nowhere more apparent than in the justifiably famous ballet sequence climax. The dancing of course is phenomenal.

Clint Eastwood’s masterpiece about aging cowboys shows the end of the West as historical reality and the beginning of the West as myth. This aspect of the film is most obviously embodied in the character of dime store novelist W.W. Beauchamp, which allows Eastwood, like John Ford before him, to print both the fact and the legend. In some ways Unforgiven represents the end of an era (one could argue it is the last great classical western) but it can also be seen as the beginning of Eastwood’s own great late period as director, a prolific stretch that continues to this day.

Writer/director Joseph Mankiewicz crafted the ultimate backstabbing, backstage drama with this tale of the rivalry between aging Broadway star Margo Channing (Bette Davis in her finest performance) and devious young upstart Eve Harrington (Anne Baxter). As with The Apartment, the real star here is the razor-sharp wit of Mankiewicz’s brilliant screenplay, one of the greatest ever written: “Fasten your seat belts. It’s going to be a bumpy night.”

Sentimental without being mawkish, this beautiful film tells the story of a youthful, liberal priest, Father O’Malley (Bing Crosby), who is transferred to an inner-city parish where his methods conflict with those of curmudgeonly Father Fitzgibbon (Barry Fitzgerald). Directed with a deft touch by the great Leo McCarey, who proves that Bing Crosby, a million miles away from the persona of his Road pictures, really could act. And if the scene where Fitzgibbon is reunited with his old Irish mother doesn’t make you cry, then I don’t want to know you.

The failure of the Academy to award Best Picture of 1941 to Citizen Kane is often cited as definitive “proof” that the Oscars have always been out of touch – the cinematic equivalent of the Grammys not honoring Elvis, The Beatles or Bob Dylan for their best recorded work. However, as innovative and influential and great as Kane is, John Ford’s deeply moving portrait of life in a 19th century Welsh mining community is nearly as cinematically expressive and, for my money, the more emotionally affecting work. Ironically, How Green Was My Valley is very similar to Kane in its treatment of the theme of subjectivity; what we see is not after all objective reality but the romanticized memories of Irving Pichel’s offscreen narrator.

A strong candidate for the most entertaining movie ever made, Casablanca irresistibly weds the theme of self-sacrifice for a greater good to a love story set against a backdrop of wartime intrigue. Mix in Bogie and Bergman at their most iconic, deliciously witty dialogue, a cast of colorful supporting characters played by unforgettable character actors and the able craftsmanship of director Michael Curtiz and you have Exhibit A for anyone looking to understand the genius of Hollywood’s old studio system.

Filmmaker, author and Film Studies instructor. END_OF_DOCUMENT_TOKEN_TO_BE_REPLACED
This entry was posted on Wednesday, February 23rd, 2011 at 8:24 am and tagged with Academy Awards, All About Eve, All Quiet on the Western Front, An American in Paris, Billy Wilder, Casablanca, Clint Eastwood, Francis Ford Coppola, Going My Way, How Green Was My Valley, John Ford, Joseph Mankiewicz, Leo McCarey, Lewis Milestone, Michael Curtiz, The Apartment, The Best Years of Our Lives, The Godfather, Unforgiven, Vincente Minnelli, William Wyler and posted in Film Reviews, Other Lists. You can follow any responses to this entry through the RSS 2.0 feed.
« Remembering Altman
The Last Ten Movies I Saw »

10 responses to “Deserve’s Got Nothing to Do With It”