French behemoth Gaumont, a studio that has been around since the dawn of motion pictures and produced some of the greatest movies of all time, has recently begun releasing high-quality Blu-ray discs of their catalogue titles and aiming them squarely at the international market. Their new Blu-ray releases of two masterworks of French cinema, Jean Renoir’s French Cancan from 1954 and Robert Bresson’s A Man Escaped from 1956, come with optional English subtitles and are “region-free” discs to boot. This means that you don’t need an obscure multi-region player like mine to enjoy them. (That’s right, American kids can now enjoy Bresson in high-definition on their Playstations!) For cinephiles everywhere, especially Francophile cinephiles like yours truly, this is cause for celebration. 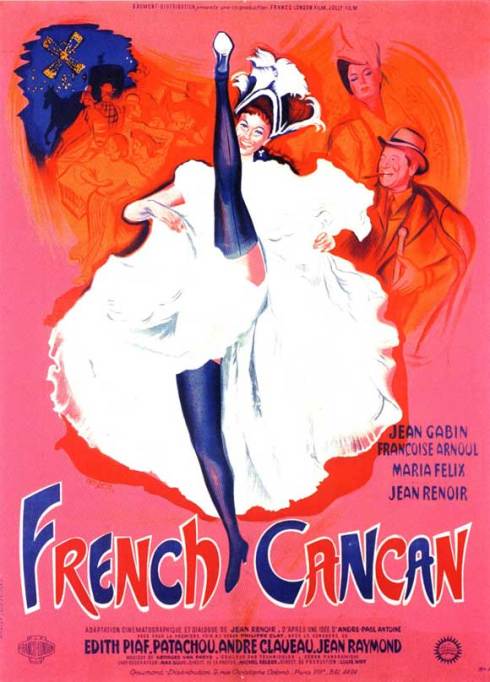 As someone who first saw French Cancan in the 1990s on a videotape from the old Interama VHS label, featuring an approximation of the film’s original color scheme that could be charitably described as “badly faded,” Gaumont’s new release comes as a major revelation. Their Blu-ray is based on a 2010 restoration of the original 3-strip Technicolor elements that causes the film’s vivid color cinematography, one of its most crucial aspects, to “pop” in a way that it never has before on home video. Putting to shame even the DVD version released by the normally reliable Criterion Collection from a few years back, I can honestly say I feel as though watching Gaumont’s Blu-ray of French Cancan was the first time I’ve ever truly seen the movie.

As its title implies, French Cancan is one of the most quintessentially French movies ever made. Directed by one of the giants of French cinema (himself the son of one of the giants of French Impressionist painting), the film tells the story of the founding of the legendary Moulin Rouge nightclub in the late 19th century and the concurrent revitalization of the can-can dance craze. Furthermore, Jean Gabin, arguably the most iconic of French actors, gives one of his most charismatic performances as Moulin Rouge founder Henri Danglard, and legendary songstress Edith Piaf even pops up in a cameo. Rounding out the cast are Maria Felix as Lola, Danglard’s belly-dancing mistress, with whom he eventually loses interest in favor of Nina, an ingenue played by the delightful Françoise Arnoul. It is ironic that the most memorable aspect of this French extravaganza might just be the ravishing Felix, an icon of the golden age of Mexican cinema, whose unforgettably hot-blooded star persona combined the fierce independence of a Joan Crawford with the full-bodied sensuality of an Ava Gardner.

Renoir was of course a great visual stylist. Central to appreciating the nostalgic, magisterial portrait of fin-de-siecle Paris he paints in French Cancan is recognizing his recreation of the feel of post-Impressionist painting. Because 3-strip Technicolor featured a more vibrant and “unrealistic” color palette than other color processes and because it featured a greater separation between colors, Technicolor was especially conducive to capturing the look of the broad planes of bright, primary colors seen in the paintings of Toulouse-Lautrec. It is this aspect of French Cancan that positively dazzles on Blu-ray; the film’s famous can-can climax, an ecstatic, near-orgiastic riot of form and color that seems to go on forever, resembles nothing so much as a series of Toulouse-Lautrec paintings that have come thrillingly alive.

Robert Bresson also knew a thing or two about painting, having worked in that medium before turning his attention to filmmaking in the 1930s. Tantalizingly little is known about this early part of Bresson’s life (intriguingly, he claimed he gave up painting because it made him “nervous”). But if his movies are anything to go by, Bresson probably worked in the minimalist style of 17th century religious painter Georges de la Tour. The flatness and the “nocturnal light” of la Tour’s work, itself influenced by Caravaggio and the Dutch masters, appear to be a visual reference point for the similar qualities that can be found in Bresson’s work of the 1950s.

Gaumont originally signed on to produce A Man Escaped in the wake of the success of Bresson’s previous film, The Diary of a Country Priest in 1951. Based on the memoir of French Resistance member Andre Devigny, A Man Escaped tells the story of Fontaine, a Lieutenant in the French Army who escapes from a Nazi prison after being condemned to death for blowing up a bridge. All of the hallmarks of Bresson’s mature style, which can be seen in embryonic form in Country Priest, are fully realized for the first time in A Man Escaped; these include the use of non-professional actors who have been rigorously trained to recite their lines in flat, neutral tones, a frequent use of close-ups that fragment the human body, and a prominent use of voice-over narration and off-screen sounds. In A Man Escaped, all of these elements combine to create one of the most formally perfect and spiritually uplifting works of art that I know of.

Bresson’s use of sound especially is so creative that it is worth discussing in detail. A Man Escaped contains a fascinating interplay between sounds that are diegetic (coming from within the world of the movie) and non-diegetic (coming from without). Lieutenant Fontaine’s nonsimultaneous diegetic voice-over is crucial in drawing us into the character’s inner world. The past tense character of the narration, along with the film’s title, are also key in making the outcome of the story seem preordained. We know from the get-go that Fontaine will escape; Bresson, an intensely process-oriented director, shifts the suspense away from “what will happen” and onto “how it will happen.”

One of Bresson’s maxims was to “replace an image with a sound whenever possible.” This strategy can be seen many times throughout A Man Escaped and is employed for different reasons. At the film’s beginning, we see a Nazi prison guard dragging his keys along the railing of a stairway. We never see the image again but Bresson has already established a shortcut method of communicating to the audience by allowing us to merely hear the sound throughout the rest of the movie when he wants to indicate the guard is near. Conversely, at the end of the film, Bresson builds suspense by allowing us to hear a squeaking noise several minutes before revealing its origin: another guard riding a bicycle in circles around the prison’s outer walls.

The use of non-diegetic music (i.e., that which cannot be heard by the film’s characters) is also fascinating in A Man Escaped. Bresson repeatedly uses Mozart’s Mass in C Minor to score the action onscreen, although he uses this music in a drastically different way than the typical film director. Bresson never uses music to manipulate the viewer emotionally but for rhythmic and thematic purposes instead; Mass in C Minor, for instance, is played every time Fontaine makes contact with a fellow prisoner for the first time or learns a new piece of information that will help him escape. The viewer therefore becomes aware, even if only on a subconscious level, that all of these scenes are somehow linked thematically. After repeated viewings, it is easy to see that Bresson is underlining how important it is for Fontaine to trust his fellow prisoners in order for his plan of escape to work.

Unlike their release of French Cancan, Gaumont’s Blu-ray of A Man Escaped is not based on newly restored film elements. Consequently, it does not provide as dramatic of an upgrade in terms of sound and image quality over previous DVDs. However, it is definitely still an upgrade, with a wonderful transfer providing much more film-like characteristics such as increased depth and grain. I consider both of these discs essential and am very pleased to have them in my library. I am also intensely curious to see what else Gaumont may have in the pipeline; I’m keeping my fingers crossed for a Louis Feuillade box set.