“Hitchcock requires a situation of normality, however dull it may seem on the surface, to emphasize the evil abnormality that lurks beneath the surface. Hitchcock understands, as his detractors do not, the crucial function of counterpoint in the cinema. You cannot commit a murder in a haunted house or dark alley, and make a meaningful statement to the audience. The spectators simply withdraw from these bizarre settings, and let the decor dictate the action. It is not Us up there on the screen but some play actors trying to be sinister. However, when murder is committed in a gleamingly sanitary motel bathroom during a cleansing shower, the incursion of evil into our well-laundered existence becomes intolerable.” 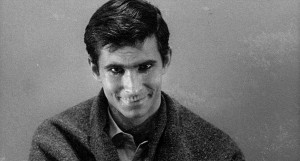 Alfred Hitchcock’s Psycho, which turns 50 years old(!) this year, will be screening at the Music Box theater in a new print in October, immediately followed by a release on Blu-ray, making it only the third Hitchcock film to get the HD treatment on home video (after The 39 Steps and North By Northwest). I first saw Psycho on basic television, commercials and all, when I was around ten years old, an ideal age for one to start watching Hitchcock, and even then I already knew the film’s “secret.” Psycho is so ingrained in the American consciousness, it has been referenced and parodied and ripped off so many times, that it has become one of those works of art, like Woody Guthrie’s “This Land is Your Land,” that viewers may feel they were born knowing.

So what is it about Psycho that makes it so special? How exactly did it single-handedly inaugurate our modern era of horror and why has it been so influential over the past half-century? As its title would imply, Psycho is part of the subgenre known as psychological horror. Although the subgenre has been around since the silent era, as anyone who’s seen The Cabinet of Dr. Caligari can attest, Psycho kicked off a particularly modern cycle of psychological horror that, as Sarris notes, is rooted in the most banal aspects of contemporary American life. This, combined with Psycho‘s graphic violence, helped to pave the way for the physical horror movies (“slashers”) that became increasingly prevalent from the 1960s through the present day.

It is important to remember that Hitchcock was in an extraordinarily privileged position when he made the film. Indeed, he was perhaps the only director working in America at the time who was even capable of making such taboo-busting and groundbreaking genre fare (in addition to its “graphic” violence, which of course looks tame today, Psycho also features the first onscreen toilet flush in a Hollywood movie). Hitchcock was privileged primarily because of his long track record of making movies that had been commercially successful. But, even then, in order to quell the anxieties of Universal executives, he had to shoot the film quickly and cheaply using a crew from his television show Alfred Hitchcock Presents. This meant foregoing the widescreen format and Technicolor process of his previous few movies. In exchange for keeping costs down, Hitchcock did not have a lot of people looking over his shoulder and telling him what to do. Consequently, he was able to make a highly personal film utilizing the resources of Hollywood in which his obsessions were writ large on the big screen.

At the time of making Psycho, Hitchcock had been in the business for thirty-five years. Starting out in England and Germany in the silent era, then in America beginning in 1940, Hitchcock had honed his filmmaking craft on a series of thrillers that had achieved an unparalleled visual and thematic complexity by the late 1950s. Interestingly, Psycho consciously builds on what Hitchcock had been doing specifically during the previous decade and is sometimes referred to as the third part of a loose “trilogy of voyeurism,” following Rear Window in 1954 and Vertigo in 1958. In these movies, Hitchcock demonstrated the power of cutting a scene together by alternating subjective and objective points-of-view, having the audience see the world through a character’s eyes, usually with the purpose of making us identify with the darker side of human nature. In Psycho, Hitchcock took this technique to its logical, disturbing limit.

In the trilogy of voyeurism, Hitchcock’s treatment of the theme starts off as relatively lighthearted in Rear Window and then becomes progressively darker with each subsequent film. The consequences of voyeurism also became more disastrous for the characters in each film, culminating in Psycho’s shower murder, which can be seen as Norman Bates’ only means of sexual release after arousing himself through the act of spying. The interplay of subjective and objective points-of-view is particularly disturbing here as the viewer is asked to assume Norman’s perspective not only during the murder but also during his meticulous cleaning up of the bathroom in its aftermath. The hypnotic, silent, clean-up scene, in which we watch Norman wash away and mop up every trace of blood spatter in the porcelain and tile-lined bathroom, goes on far longer than it needs to for any narrative purpose and is arguably the most compelling sequence in the film. By assuming Norman’s point-of-view, we feel, against our better judgement, a wish for him to succeed in his efforts of covering up the crime.

Our identification with Norman reaches its apex in the following scene when he attempts to get rid of Marion’s car by pushing it into the swamp behind the Bates Motel. By alternating between objective shots of Norman’s anguished face with subjective point-of-view shots of the car as it temporarily stalls while only half-submerged in the swamp, Hitchcock has the audience identify with Norman’s desire to see Marion’s car continue its downward trajectory. No matter who you are or how many times you’ve seen the film, at that moment you want the car to sink! That is a testament to how well-constructed Hitchcock’s best sequences are. That is the genius of Hitchcock.

Another reason Psycho continues to be an object of fascination fifty years after its release is what I would term its treatment of the “doppelgänger motif.” Hitchcock had always been interested in the duality of human nature, the belief that good and evil co-exist side by side in the human heart. In his earlier Hollywood films, he illustrated this by having two different characters represent two different sides of a single personality. This is most obvious in Shadow of a Doubt (where parallels are constantly drawn between Joseph Cotton’s Uncle Charlie and Theresa Wright’s Young Charlie) and Strangers on a Train (where Robert Walker’s Bruno is depicted not so much a fully rounded character as he is the murderous id of Farley Granger’s Guy). By the time he made Psycho, Hitchcock was also ready to push the concept of the psychological double to its logical limit by having two distinct personalities housed within a single character, a disturbing idea never before seen in a Hollywood movie. This concept is visually represented by the ordinary looking Bates Motel with the gloomy Victorian mansion lying incongruously on the hill just behind it.

The above-mentioned aspects of Psycho are just some of the reasons it has become one of the most cherished films in the history of cinema. In the span of fifty years, there have been three Psycho sequels, one made-for-TV movie spinoff, a remake and literally hundreds of imitations both in America and abroad. Yet I don’t believe anything compares to the original, which still has the power to shock and entertain and to draw us into its nightmarish world time and time again. I have seen Psycho twice in 35mm prints. I have seen it on television, video and DVD. Shortly after October 19th, just in time for Halloween, I will watch it on Blu-ray for the first time. And I know I will still want to see Marion Crane’s car sink, I will still jump when Detective Arbogast gets it at the top of the stairs and I will still get goosebumps when Mrs. Bates tells us that she couldn’t even hurt a fly.