David Lynch: Walk with Me 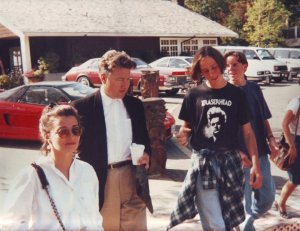 In August of 1992, shortly after my 17th birthday, I attended the first annual “Twin Peaks Fest” in Snoqualmie, Washington. Like many David Lynch aficionados, I was fairly devastated when Twin Peaks, the television show, had been cancelled the previous year and was likewise ecstatic when I learned that Lynch immediately planned to make a feature film prequel to the groundbreaking series.

The film, Twin Peaks: Fire Walk with Me, received its U.S. premiere during that first Twin Peaks Fest and the above photograph is of me and Mr. Lynch strolling and chatting after I ran into him by chance outside of the hotel where we both happened to be staying. I told Lynch that I didn’t want to bother him but that I was glad he had decided to “bring Twin Peaks back” and that his movies had given me a lot of pleasure over the years. He thanked me and then said in his loud and very distinctive nasal voice, “Take care of yourself, man.”

This encounter took place at probably the lowest point in Lynch’s professional career. Although the first season of Twin Peaks had been a hit, the second season was ignominiously cancelled and Fire Walk with Me received the worst reviews of Lynch’s entire career. (Dune had been a critical disappointment too but that wasn’t really considered a “Lynch film.”)

I didn’t listen to the critics and managed to see the movie five more times in the theater during its brief run. I was and still am impressed by the simultaneously darker and goofier direction in which he took the movie. I loved the hilarious interactions between Chris Isaak’s FBI man and the local-yokel small town sheriff played by Gary Bullock. I loved the full-blown surrealism of the brief scene involving David Bowie. And most of all, I loved how personal it all felt; Lynch’s bitterness over the show’s cancellation was palpable and could be immediately felt in the opening image of an ax destroying a television set.

Upon returning home I wrote a letter to my local paper, the Charlotte Observer, offering to provide them photographs and anecdotes from the Fest in anticipation of the film’s local release. The Observer‘s film critic wrote me back to suggest I try a horror fanzine like Fangoria(!) instead.

18 years later, David Lynch is considered by many to be America’s greatest living filmmaker. His 2001 masterpiece, Mulholland Drive, recently topped many critics polls of the best films of the decade, including prestigious polls in France’s Cahiers du Cinema and Film Comment in the U.S. Fortunately, Twin Peaks: Fire Walk with Me, has also undergone a critical re-evaluation; it is now considered a cult classic and has been cited by none other than Greil Marcus as one of the best American films of the 1990s.

Filmmaker, author and Film Studies instructor. END_OF_DOCUMENT_TOKEN_TO_BE_REPLACED
This entry was posted on Sunday, August 15th, 2010 at 11:21 pm and tagged with David Lynch, Twin Peaks: Fire Walk with Me and posted in Reminiscences. You can follow any responses to this entry through the RSS 2.0 feed.
« CIFF – Twenty Two Most Wanted!
The Last Ten Movies I Saw »

5 responses to “David Lynch: Walk with Me”